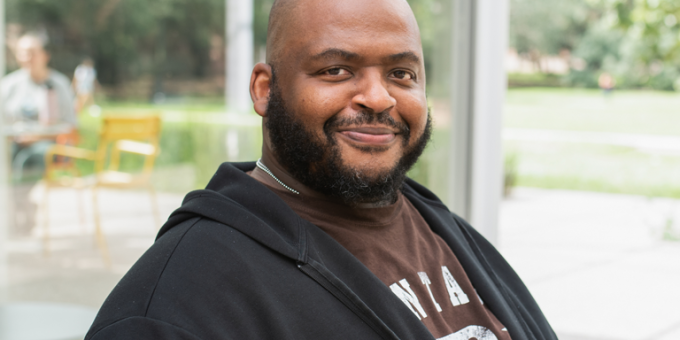 BLOOMINGTON – Indiana University College of Arts and Sciences alumnus Kiese Laymon (M.F.A. ’02, Creative Writing) has been awarded a 2022 MacArthur Fellowship, a prestigious national award that honors “talented individuals who have shown extraordinary originality and dedication in their creative pursuits.”

Popularly known as the “genius grant,” the MacArthur Fellowship is one of the most distinguished awards of its kind and is annually given to professionals working in an array of fields, from physics and mathematics to film and writing. Laymon is a renowned author of both fiction and nonfiction, and the MacArthur Foundation lauded his work as being “grounded in radical honesty and his perspective as a Black Southern man.”

“We take enormous pride in our alumni who are changing the world for the better, and Kiese Laymon is doing exactly that,” said Rick Van Kooten, executive dean of the IU College of Arts and Sciences. “Professor Laymon is a true inspiration—as an artist, a writer, a teacher, and an unparalleled observer of the human condition. This outstanding honor is so well-deserved, and we’re deeply proud to count Professor Laymon among the College’s great alumni.”

The Libbie Shearn Moody Professor of Creative Writing and English at Rice University, Laymon’s writing spans a variety of genres, topics, and forms. His novel Long Division (2020) combines elements of science fiction, mystery, and speculative fiction, and his collection of nonfiction essays How to Slowly Kill Yourself and Others in America (2021) was named a New York Times Notable Book, with NPR calling Laymon a “star in the American literary firmament.”

Laymon’s bestselling memoir Heavy (2018) was named a Best Book of the Year by The New York Times, Publishers Weekly, NPR, and a host of other publications, and the book received the Carnegie Medal for Excellence in Nonfiction, the Christopher Isherwood Prize for Autobiographical Prose, and was named one of the 50 best memoirs of the past 50 years by The New York Times.

“I’ve heard across the country that Kiese Laymon’s books have changed hearts and minds, changed lives, and even saved a few,” said Michael Adams, a Provost Professor of English and chair of the IU Department of English. “Kiese Laymon has a powerful voice and the MacArthur Fellowship, so richly deserved, will amplify it to the benefit of all.”

The MacArthur Foundation praised Laymon’s work as representing a “powerful meditation on the potential for truth, reconciliation, and love—in interpersonal relationships and society as a whole—to engender a more humane future.” Originally from Jackson, Miss., Laymon is currently at work on several projects, including a long poem, a horror comedy, a children’s book, and a film adaptation of his memoir Heavy. He’s also the founder of The Catherine Coleman Literary Arts and Justice Initiative, a program that strives to make young people and their parents more comfortable with the process of reading, writing, revising, and sharing creative work.