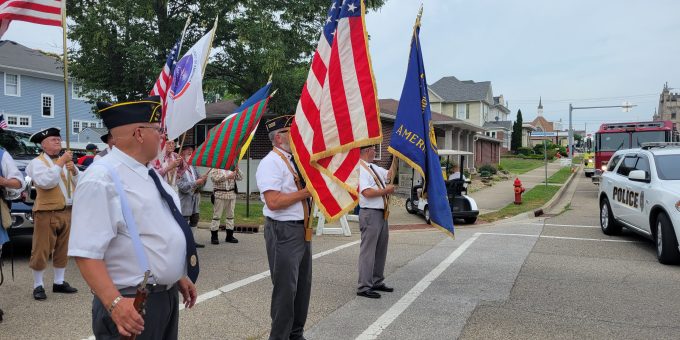 BEDFORD – Saturday brought the community together to celebrate the rich history of Limestone used for historical landmarks, buildings, and statues throughout the United States during the Limestone Heritage Festival Parade.

This year brought in over 60 entries varying from antique trucks, cars and tractors, as well as the Bedford Indiana Jeepers, and some of the businesses that help the economy thrive in Lawrence County.

The parade also provided an opportunity to celebrate the success of the Bedford North Lawrence Unified Track Team after they won the Unified Track State Championship earlier in the month, as they helped raise the flag at the start of the parade.

This year also celebrated Jeff and Paige Callahan as the Parade Grand Marshals for their continued support and love of the community. From helping raise money for the Lawrence County Cancer Patient Services non-profit organization, to serving on the board for the Boys & Girls Club of Lawrence County for over 20 years, the Callahan’s were rightfully recognized for their efforts.

Jeff and Paige are members of the First Presbyterian Church, where Paige has served as Treasurer. Jeff has been with Bedford North Lawrence High School for the past 30 years. He served as a teacher for 11 years, Athletic Director for 19 years, and has coached football and baseball. He served for over 20 years as a board member with the Thornton Memorial Boys Club / Boys & Girls Club of Lawrence County. He also served as the Youth League Coach at the club from 2005 – 2014. Additionally, he was the co-founder of the Renaissance Program at BNL.

Paige Callahan currently works at Crane and was a teacher at Bedford North Lawrence High School for 12 years. She also served as an Adjunct Professor of Mathematics at IVY Tech. She has served as a Board Member for the Limestone Girls Club, Swim Coach at BNL, and has volunteered with the Boys & Girls Club. Paige also served as the organizer of the BNL Stars vs. Cancer baseball fundraiser game from 2015-2021, where over $35,000 was raised for cancer research and support of the Lawrence County Cancer Patient Services organization.

With many of the entries returning year after year, it is always nice to recognize them for the efforts they made to decorate their floats, vehicles and entries with awards of excellence during the parade. Some of the winners included:

Bender Lumber with the Most Patriotic for a Commercial business with the Uncle Sam Top Hat on the back of one of their flatbed trucks.

Base Camp Country Real Estate with the Commercial Award of Excellence. Celebrating their business with Red, White, and Blue balloons and bunting.

The Church Award of Excellence went to the Englewood Baptist Church for their creative float design.

The Tractor Award of Excellence went to Steve Turner and his family for their patriotic tractor design and creative use of patriotic dinosaur riders.

The Firetruck Award of Excellence went to the Huron Volunteer Fire Department for the decorations on one of their fire engines.

The Antique Truck Award of Excellence was awarded to Lee Blansett for his Chevy truck.

The non-commercial Award of Excellence went to the Quarry Quilters where they showed off some of the quilts made by the group, as well as a large spool of yarn in the rear of the truck pulling the float.

The Antique Car Award of Excellence went to Artie Grimaldo and his El Camino.

The Musical Award of Excellence was awarded to the Bedford North Lawrence Marching Stars, who provided music during the parade.

The Most Patriotic Church Award was given to Grace Child Care Ministry, the Youth Ministry of Grace Full Gospel Church with a Liberty Bell in the back of the truck and children dressed in Red, White, and Blue.

Continuing with their success at the VEX Robotics World Championship in Dallas, TX, the Needmore Elementary Robotoppers Robotics team was also awarded the Non-Commercial Most Patriotic Award during the parade.

The Equestrian Award of Excellence was given to Tessa Lewis and her horse Windy for their Patriotic attire.

The Fan Favorite Float for Greg Day for Lawrence County Sheriff had a soaring eagle and Sheriffs Badges to commemorate the event.