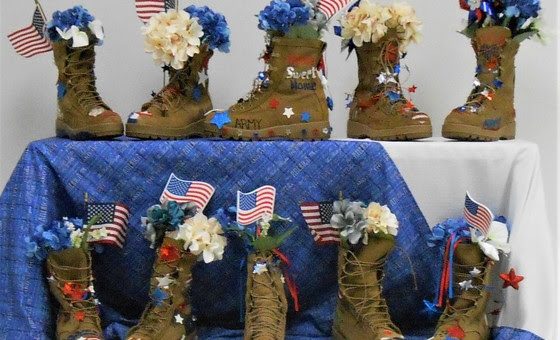 (ROCKVILLE) – “Veteran” is an honorable title that follows one through their life journey.  This is true for all veterans, even when part of life’s journey includes time spent in prison.

What one does while in prison can help make a difference as many of the women veterans at the Rockville Correctional Facility (RCF) learned as they participated in “Project In Her Boots” by decorating an actual military-issued combat boot. With boots donated by the military and materials donated by the RCF Recreation Department, the women were able to creatively express their time in service to our country. Also, along with decorating the boot, each wrote a brief narrative expressing their feelings about their military service.

The discipline and structure learned during that time is often still evident in their incarceration. Statistically, incarcerated military veterans have fewer discipline issues, keep their bed areas tidy, and follow through on responsibilities.

Project In Her Boots is a grassroots movement that brings awareness and recognition to the thousands of women who have joined the Unites States military; every woman in the military, whether veteran or active duty, voluntarily made the choice to join. This includes the eight current RCF offender veterans, who represent each branch of military service with the exception of the Coast Guard.

Offender C. M. joined the Marine Corp because her father was a Marine – and she wanted to be like him. Being a Marine taught her discipline, courage, and honor. Offender S. M. wanted to see the world and see a change in her life. She found her time in the U. S. Army to be both exciting and rewarding. And Offender K. E. now finds herself filled with an overwhelming sense of pride for the American flag since serving in the Navy, just like her WW II hero, her “papaw”.

This group of women veterans was organized by RCF Transition Coordinator, Mrs. Kristen Selvia-Butler and is part of the national Incarcerated Veterans Program (IVP). The IVP provides veterans with opportunities, services and information relating to their military service and the benefits they may be eligible for from the US Dept. of Veteran Affairs upon their release from incarceration.  The program also encourages those eligible to come together and participate in activities to cultivate a sense of camaraderie and positive fellowship, such as the recent Project In Her Boots activity or a life-skills lesson. Kristin hopes to see the group grow and enhanced constructive opportunities for all of the women veterans. Commenting about the boot decorating afternoon, Mrs. Selvia-Butler stated, “It was a great way to bring them back together after not being able to gather for so many months due to the pandemic.”

The decorated boots, along with the women’s stories, will be on display at the Covered Bridge Art Gallery in Rockville, Indiana from November 1-14, 2020.

To learn more about ways to support the RCF Veterans group contact the facility at 765-569-3178. If you are a veteran in need of exploring your available benefits, contact the Veterans Affairs Benefits at 1-800-827-1000 or online at this link.