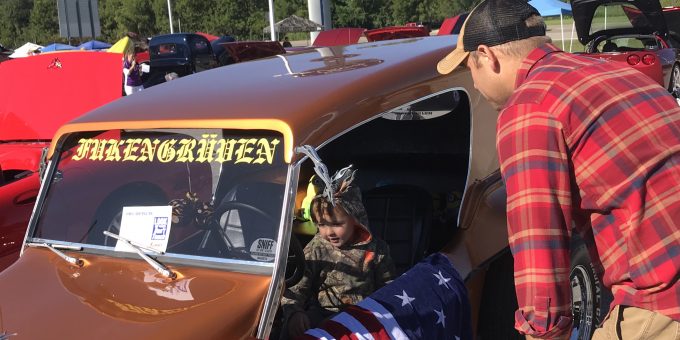 “This year was a record setting event with over 245 entries at this year’s event,” Steve Warren stated.

A clear blue September sky opened up for this year’s event, which brought a great crowd and a fun time for those who attended the event.

Like with many other non-profits, many of this year’s fundraisers had to be canceled due to the COVID-19 pandemic.

“We spend approximately $50,000 a year helping Lawrence County families with some expenses or get needed equipment during the treatment of cancer,” Huber added.

“A lot of people say, ‘just give it to someone who needs it more than I,’ but we give them a gas card to get to treatments, whether that be in Chicago, Indianapolis or locally and they appreciate the gesture,” said Judy Heichelbech, President of Lawrence County Patient Services.

Steve Warren, one of the organizers of the event, made sure this year’s event followed all Indiana Department of Health and Lawrence County Health Guidelines.

“We asked Golden Corral to help the La-Or-Ma Shrine Club this year with the cooking because they were familiar with the guidelines to make sure the food was prepared accordingly,” said Warren.

Bedford Ford Lincoln Chrysler and Richard Burton have worked with Lawrence Cancer Patient Services for several years in allowing them to use their lot for the event.

“That partnership will still continue under Tim Hobson who now is the new owner of the dealership,” said Warren.

The Bedford Lions Club and many other volunteers work hard to set up for the event and many others help make preparations throughout the year.

At Noon, guests were treated with the raising of the flag with the help of a crane from McIntyre’s Brothers.

Roger Gales, who also was able to play his bugle at the Arlington National Cemetery earlier this year, was on hand to play as the flag was raised. Gales has taken part in the event for several years.

Kent King from American Legion Gillen Post #33 called the group to attention, and then Joanna Cobb sang the National Anthem.

A speech was given by James “Lee” Hutchinson, 95, of Bedford, who was a World War II Veteran. Hutchinson was a B-17 bomber crewman who flew missions over Germany. Hutchinson has also written several books and has been a columnist for the Times Mail newspaper. His speech was about the flag and the men and women who fought for freedom.