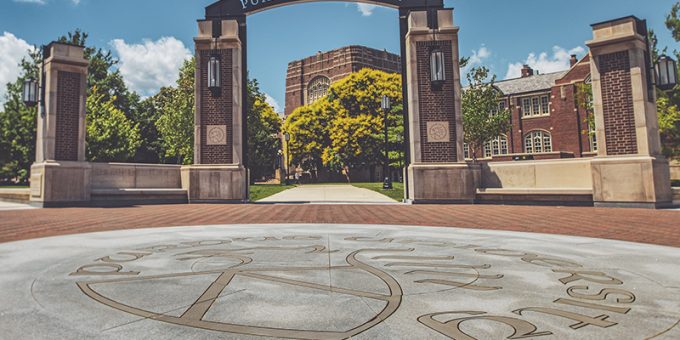 The work is supported through a broad effort announced by the White House Office of Science and Technology Policy, the National Science Foundation and the U.S. Department of Energy. The effort will include more than $1 billion in awards for the establishment of 12 new artificial intelligence and quantum information science (QIS) research institutes nationwide.

“Quantum science and engineering have the potential to revolutionize the way our society lives and works,” said Theresa Mayer, Purdue’s executive vice president for research and partnerships. “We are honored that Purdue’s experts in the field will join in this collaborative effort to solve grand challenges for our country and world.”

Purdue’s participation in the effort will be led by Yong Chen, Purdue’s Karl Lark-Horovitz Professor of Physics and Astronomy, professor of electrical and computer engineering and director of the University’s Purdue Quantum Science and Engineering Institute (PQSEI), which resides in Purdue’s Discovery Park. Chen also will serve on the center’s Governance Advisory Board.

Alexandra Boltasseva, Purdue’s Ron and Dotty Garvin Tonjes Professor of Electrical and Computer Engineering, will lead the workforce development efforts of the QSC and will serve as a member of the QSC leadership team.

“The current quantum workforce is significantly underdeveloped and shorthanded,” Boltasseva said. “The center will engage students and postdoctoral associates in research activities, and cultivate the necessary expertise to ensure the United States leads the quantum revolution.”

In addition to Chen and Boltasseva, PQSEI faculty members participating in the effort are:

“Microsoft is already collaborating extensively with us through Microsoft Quantum Purdue, with Microsoft employees working onsite at Purdue,” Manfra said. “This new quantum center only strengthens the collaborative ties between Purdue and Microsoft.”

Purdue University is a top public research institution developing practical solutions to today’s toughest challenges. Ranked the No. 6 Most Innovative University in the United States by U.S. News & World Report, Purdue delivers world-changing research and out-of-this-world discovery. Committed to hands-on and online, real-world learning, Purdue offers a transformative education to all. Committed to affordability and accessibility, Purdue has frozen tuition and most fees at 2012-13 levels, enabling more students than ever to graduate debt-free. See how Purdue never stops in the persistent pursuit of the next giant leap at https://purdue.edu/.

Discovery Park is a place where Purdue researchers move beyond traditional boundaries, collaborating across disciplines and with policymakers and business leaders to create solutions for a better world. Grand challenges of global health, global conflict and security, and those that lie at the nexus of sustainable energy, world food supply, water and the environment are the focus of researchers in Discovery Park. The translation of discovery to impact is integrated into the fabric of Discovery Park through entrepreneurship programs and partnerships.

About the Purdue Quantum Science and Engineering Institute

Located in Discovery Park, PQSEI fosters the development of practical and impactful aspects of quantum science and focuses on discovering and studying new materials and basic physical quantum systems that will be suited for integration into tomorrow’s technology. It encourages interdisciplinary collaboration leading to the design and realization of industry-friendly quantum devices with enhanced functionality and performance close to the fundamental limits. PQSEI lays out strategies for the design of systems based on these devices in order to bring these new levels of functionality and performance to a vast community of users.