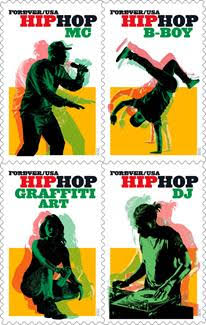 (INDIANAPOLIS) – The U.S. Postal Service, together with the Universal Hip Hop Museum, today unveiled new Hip Hop stamps to celebrate the many facets of this popular and artistic culture.

These Forever stamps are now available at Post Offices nationwide and at usps.com/hiphop. News of the stamps is being shared using the hashtag #HipHopPostageStamps.

The pane of 20 stamps features the four elements of hip-hop. The bold, digitally tinted images on the stamps are intended to appear in motion. The words “Forever,” “USA,” “Hip Hop” and the name of the element featured appear across the top of each stamp. The stamps are highlighted with a vivid yellow, green, red and black color scheme. The title of the stamp issuance, printed in red and black, is centered on the top of the pane. Art director Antonio Alcalá designed the stamps, which feature photographs by Cade Martin.

The Universal Hip Hop Museum is the official museum of hip-hop, founded by its pioneers. Set to open in the Bronx, NY, in 2023, the museum celebrates and preserves the history of local and global hip-hop music and culture from the past, present and future. The museum was built as a space for audiences, artists and technology to converge and create unparalleled educational and entertainment experiences.

“The USPS issue of a commemorative stamp devoted to hip-hop culture, in association with the Universal Hip Hop Museum, acknowledges the historical global influence and impact of the genre that was born in the South Bronx, NY, and raised worldwide,” said Bucano.

Since its inception, the electrifying music, dance and artistic movement of hip-hop has profoundly influenced other areas of American and global popular culture. Emerging in the mid-1970s in African American and Caribbean American neighborhoods in New York City, teenagers developed hip-hop for neighborhood fun, storytelling and to speak out about social issues overlooked by mainstream society.

Over the next several decades, hip-hop grew into a global musical and cultural force. Not only are hip-hop artists found around the world, but each scene also brings its own contributions to the art form and tells its own local stories. Understanding the roots of hip-hop became a defining part of the culture itself, so much so that this knowledge is now widely known as hip-hop’s fifth element.

The Hip Hop stamps are being issued as Forever stamps, which are always equal in value to the current First-Class Mail 1-ounce price.

Customers may purchase stamps and other philatelic products through The Postal Store at usps.com/shopstamps, by calling 800-STAMP24 (800-782-6724), by mail through USA Philatelic, or at Post Office locations nationwide. Forever stamps will always be equal in value to the current First-Class Mail 1‑ounce price. A variety of stamps and collectibles also are available at ebay.com/stamps.