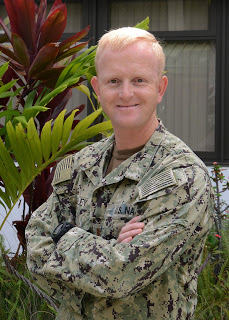 Ensign Samuel Mobley serves as a Navy industrial hygiene officer within the U.S. Pacific Fleet area of operations. The U.S. Pacific Fleet is the world’s largest fleet command, encompassing 100 million square miles, nearly half the Earth’s surface, from Antarctica to the Arctic Circle and from the West Coast of the United States into the Indian Ocean.

As a Navy industrial hygiene officer, Mobley is responsible for anticipating, recognizing and controlling hazards in the workplace that could result in an injury or illness.

Mobley credits success in the Navy to many of the lessons learned in Solsberry.

“Learning skills such as hard work and dedication during my childhood have enabled me to succeed in the Navy,” said Mobley.

Being stationed in Pearl Harbor, often referred to as the gateway to the Pacific in defense circles, means Mobley is serving in a part of the world that is taking on new importance in America’s focus on rebuilding military readiness, strengthening alliances and reforming business practices in support of the National Defense Strategy.

“Our priorities center on people, capabilities, and processes, and will be achieved by our focus on speed, value, results and partnerships,” said Secretary of the Navy Richard V. Spencer. “Readiness, lethality and modernization are the requirements driving these priorities.”

Though there are many ways for sailors to earn distinction in their command, community, and career, Mobley is most proud to have been recognized with multiple awards during his Navy career thus far.

“Specifically, I am proud of the Iraq Campaign Medal I earned while serving in the Al Anbar province as a corpsman with the Third Battalion, 24th Marine Regiment,” said Mobley.

Mobley joined the Navy as a means to achieve his goals in life.

“I had a desire to serve my country, and my interest in mechanics led me to the Navy where I could work and gain experience in the industrial environment,” said Mobley.

As a member of one of the U.S. Navy’s most relied-upon assets, Mobley and other sailors know they are part of a legacy that will last beyond their lifetimes providing the Navy the nation needs.

“In my role, it is rewarding to see how my efforts result in increased health and safety of our service members and civilians. My current command has provided me opportunities to gain experience in a new environment.,” added Mobley. “I am very proud to serve in the Navy. It is very rewarding to work with such great people and see how we make an impact on a global level.”