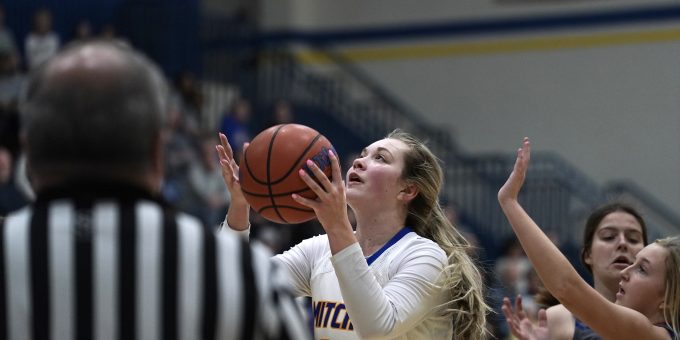 With Tanglao unable to play, as she continues to deal with a concussion that has kept her out of action for the team’s last four games, it was left up to Peterson and Slone as the lone seniors on the roster to leave a lasting impression in their final ever home game for the school.

That’s exactly what they did against the Senators, as the two combined for all 13 of the team’s fourth-quarter points to close out the victory, 48-42.

“I was really proud of our two seniors that played. It’s unfortunate that Malaya couldn’t, she wanted to be in there with him too. But I was really happy for Brooklyn and for Mylea. Four years of hard work and then they got some great support from the underclassmen tonight,” said Mitchell head coach Tim Haworth.

In the first quarter, the Bluejackets were out to an early lead after points from Peterson and junior Jillian Bond, but West Washington came fighting back and claimed their first lead of the night after an and-one from Shelby Griffitts.

In what was a back-and-forth period, the Senators’ lead got up to four points midway through, but Mitchell reclaimed control of the game after a basket from Peterson with 1:40 remaining, before scoring three more to carry a 14-10 lead into the second quarter.

The second started off strong on both ends for the Bluejackets, as they extended their lead to eight while holding West Washington scoreless for nearly four straight minutes. The Senators found a bit of a rhythm for the rest of the quarter, scoring 10 more points before the buzzer, though they were matched at every turn by Mitchell, who maintained their four-point advantage going into halftime, 26-22.

A layup from Bond marked the first points of the third, but West Washington’s Riley Hall drained two free-throws to once again make it a two-possession game. Bond scored again a minute later before a 6-0 run from the Senators tied things up with 1:25 left on the clock. Peterson cashed a long two-pointer to give the Bluejackets the lead once again with 25 seconds left, but West Washington was able to tie things up once more with a basket from Adelle Brown with two seconds left on the clock.

In those two seconds, Mitchell was able to inbound the ball to Slone, who dribbled into a half-court heave as time expired, sinking the shot and erupting the crowd at The Hive to give the Bluejackets a three-point advantage heading into the fourth, 35-32.

The first three points of the fourth belonged to the Senators, who tied the game up at 35 with 6:25 left to play.

That was not an option for them for much of the second half. They did not get their first free-throw attempts in the second half until there were only two minutes and thirty-eight seconds left on the clock in the fourth, meaning someone was going to have to step up and score for them if they wanted to win this game.

That player was Peterson, who scored on two interior looks to keep her team ahead, as the Senators continued to flip the script on the Bluejackets, getting to the line instead for their first five points of the period. A layup from Slone, sparked by a steal from Zoey Smith extended Mitchell’s lead to four with 3:17 left to play.

Another steal from the Bluejackets on the next possession led to two free-throws for Peterson, who converted on both attempts to give her team a six-point advantage with 2:38 left to play.

She made her way to the line again with just under a minute left after finally getting fouled after three straight offensive rebounds on the possession. After she made one of her two attempts, West Washington rushed the ball down the floor and Ava Woods scored a quick layup, her team’s first points in over four minutes, making it a five-point game.

Slone was intentionally fouled with 28 seconds left, connecting on both free throws to put Mitchell back up by seven.

Just after, Meredith Deaton drained a near NBA-ranged three to bring it back within four, but her team was forced to intentionally foul Slone again to stop the clock with just over 10 seconds remaining. Slone stepped up and hit both of her shots from the line, which were the final points of the game.

When all was done, Bond, Peterson and Slone not only accounted for the majority of the team’s points, as has been the case much of the year – the trio scored all 48 of them. Bond finished with 12 points, Peterson with 20 and Slone with 16.

Haworth was proud to see his team fend off the late game comeback attempt of the Senators, who tied the game up multiple times in the second half.

“I was really proud of how we responded to some adversity, especially in the third quarter. I mean, West Washington had us on our heels. And we came out in the fourth quarter and did a few things right, executed a couple of things right. And really it was on the defensive end where we got stops, we got our rebounds, so really proud of them,” Haworth said.

This win ends a four-game losing streak for the Bluejackets, who have been in plenty of close games over the past month, but have been unable to pull out wins, losing three straight by four points.

“This was a big win for for our kids, because we had been so close and to finally cross over that line and get a W, that makes us feel really good,” said Haworth.

With one game left on the schedule, another PLAC matchup against Orleans on Thursday, before the sectional round where they will take on North Knox, the number two ranked team in 2A, there’s still plenty of work to be done for Mitchell.

“I mean there were six teams in there with winning records. We’ll have to play. I don’t think these girls are scared. I’ve never known these girls to be scared,” Haworth said of the upcoming sectional matchup. “We’ve got to take care of Orleans first, another PLAC game. And then we’ll see about North Knox but right now we’re just gonna concentrate on Orleans,” he continued.