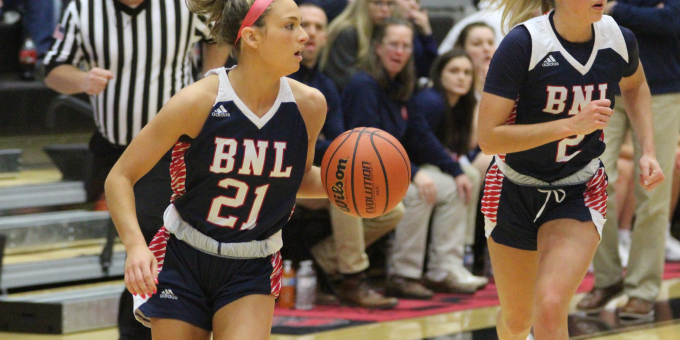 BEDFORD – For the last four years, Bedford North Lawrence and Jennings County have collided in the Class 4A sectional championship game. Now the two best teams, according to records and rankings, in the Sectional 15 tournament will meet in a grand opening.

In the bottom half of the seven-team bracket, Floyd Central (9-11) will face Silver Creek (12-8 and playing in 4A for two years because of the Success Factor rule) in the first round on Feb. 1, while New Albany (4-18) will battle Seymour (12-8) in the second game that night. Those winners will clash in the second semifinal on Feb. 3. The championship is set for Feb. 4.

BNL is chasing its 12th consecutive sectional title. Going the long, tough route is not unusual for the Stars, who have won 33 straight sectional games during their remarkable postseason streak.

“That’s just the way it rolls with us,” BNL coach Jeff Allen said. “We’ve come to expect that. You just have to prepare, and then it’s up to the kids. I don’t mind playing the first game out of the gate. I don’t think you ever win a sectional because you get a good draw. It’s about how you’re playing.”

The Stars already own a 52-39 victory over Jennings (Jan. 3 at BNL). BNL extended its winning streak over the Panthers to 24 in a row, and did so with junior star Chloe Spreen sidelined with an ankle sprain. Karsyn Norman scored 23 points and Madisyn Bailey added 10 as the Stars overcame that unexpected adversity.

“She’s the best post forward in the southern part of the state,” Allen said. “She’s very versatile. She’s improved her perimeter game, she handles the ball well. They have shooters around her. We’ll have to make sure we put pressure on them. She’s a handful, but we have to make it difficult.

“We did a good job in the regular season, without Chloe. I was surprised we played that well without her. That gives the kids confidence going forward.”

In last two championship meetings, the Panthers have made BNL squirm and sweat. Last year, the Stars escaped with a tense 38-36 triumph. Two years ago, they had to rally in the second half for a 55-51 win.

“I expect that this time,” Allen said. “Hopefully we make more plays than they do. That’s what it comes down to in the sectional. Playing the first game gives us time to prepare. We’ll both come in with fresh legs and go after each other in the first game. I’m fine with that.

“You just have to be ready to play. And we’re at home. I like that advantage. We’ll just get ready.”

The IHSAA also announced the draw for the new one-game regional format. The winner at BNL will face the champion from Sectional 16 (at Evansville Harrison) on Feb. 11. Winners from sectionals 13 (Bloomington South) and 14 (Shelbyville) will also advance to a one-game title tilt at BNL on the same day.