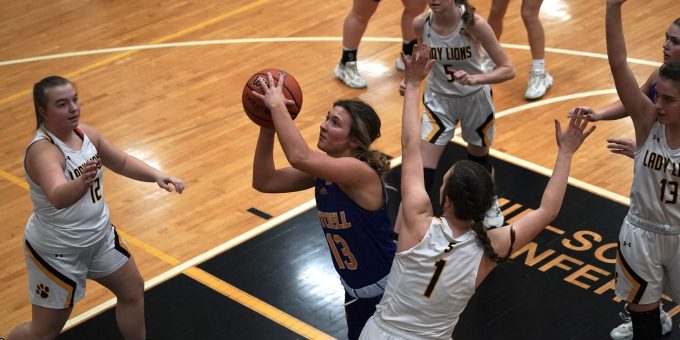 While some claim to have lucky numbers, perhaps Mitchell High School can claim to have an unlucky number after Saturday afternoon’s matchup against Salem, where they lost their third game in a row by a margin of four points, 46-42.

Including this most recent matchup against the Lions, this is now the Bluejackets fourth game in their last six where they’ve lost by the same total.

Much like their other four-point losses over the last month, Mitchell played a close game, exchanging leads throughout back-and-forth with Salem, before letting the game slip down the stretch.

After coming back from a 9-point deficit at the half to take the lead briefly in the third, the Bluejackets found themselves within a point of winning the game late in the fourth against the Lions, but were unable to score beyond the 2:16 mark.

“We get to where we’ve come all the way back to the lead. We worked so hard to come back after being down nine. They hit that three right before halftime, that put us down and they come back and have the ball out of bounds to start the third and then we kept making adjustments and once they got used to one of our defenses, we’d make adjustments,” said Mitchell head coach Tim Haworth.

“We had quite a few, maybe four opportunities in a row and either don’t make the shot or I don’t know how many turnovers we had today. I don’t think very many but when we did turn over it was at a crucial time,” he added.

Salem and Mitchell were fairly even throughout the first, both teams connecting on a variety of inside shots, threes and free-throws, before the Lions ended the quarter up four, 15-11.

Scoring wise, the second quarter largely followed the first, with Salem outscoring the Bluejackets once again, this time by five points instead of four, closing the half with a three from Sidney Brown to send them up by nine by the end of the period.

Perhaps the most striking difference between the two teams was the gap between their offensive efficiency through two quarters, with Mitchell shooting just 43.8% compared to a whopping 78.6% from the Lions.

One positive for the Bluejackets in the half was the balance of their offensive. In previous games, the trio of Mylea Slone, Jillian Bond and Brooklyn Peterson had largely carried the scoring duties for them, often scoring all but a handful of their total points throughout a game. In the first half, Bond led things with six points, but just behind her were Slone with five, Zoey Smith with four, Briley Dicks with two and Peterson with one.

“Everybody knows, you could tell the way Salem was defending us, who they were trying to concentrate on and that’s going to open up opportunities for Zoey (Smith) and Briley (Dicks),” Haworth said.

Mitchell scored the first five points of the third after baskets from Slone and Peterson. Their run would be broken by a free-throw from Sidney Burton with 4:28 left in the quarter, but another bucket from Peterson, as well as a made shot by Bond reduced Salem’s lead down to one with 3:30 left to play in the quarter.

After a made free-throw from Brown, a Smith three-pointer gave Mitchell their first lead since midway through the first with three minutes left to play. The Lions regained the lead shortly after, thanks to a three from Kendall Hickey. The Bluejackets would get one more basket from Peterson before the buzzer, but another six points from Brown in the final 1:33 of the quarter put Salem back in the driver’s seat 38-32 before the fourth.

Just like the third, the fourth quarter began with five unanswered points from Slone and Peterson to bring it back within one. Once again, Brown, who finished the game with 26 points, was the one to score, extending the Lions’ lead back to three with 5:36 left to play.

Slone drive to the basket, scoring on a layup shortly after but again Brown was able to find two more points, this time from the free-throw line to extend the lead back to three with just under five to play.

Over the next few minutes, both teams struggled from the line, with Mitchell shooting 1/4 and Salem going 0/2. The Bluejackets were then able to tie the game for a final time, as Bond scored on a shot attempt inside with 2:16 remaining. With three more possessions, Mitchell was unable to convert before time expired, giving up four points to free-throws from clock-stopping intentional fouls to lead to the final score.

Though the team has seemingly found a rhythm over the last month, going from routinely losing by double-digits to fighting to win one or two possession games in the final minutes, the end results have remained the same.

The clear improvement shown in these games, regardless of the results, has remained encouraging for Haworth, who has been happy to see his team continue fighting to win these games, taking the other teams down to the final horn in these close losses.

“The girls don’t quit and they give themselves an opportunity to win. Yet, we’re just not cashing in on those opportunities when they present themselves. And so, I’m pretty proud of them. And I’ll tell you what, as I said before, there’s no quit in them,” he said.

Going forward, Haworth said it will be important for the Bluejackets to remain consent to pull out these close games and completed these comebacks that they’ve struggled to close.

“Once we get a lead, we’ve got to know how to build on it. And it just seems like once we come all the way back, maybe there’s a little let down. ‘Oh, finally we’re back in’ and then, a couple mistakes or a couple of missed shots, and then our opponents take advantage of it. And that’s where it turns,” the coach said.

With this loss, Mitchell’s record on the season is now 4-16. Their next and second to last game of the season will be Monday, when they’ll welcome Patoka Lake Athletic Conference opponent West Washington (7-11) to The Hive.