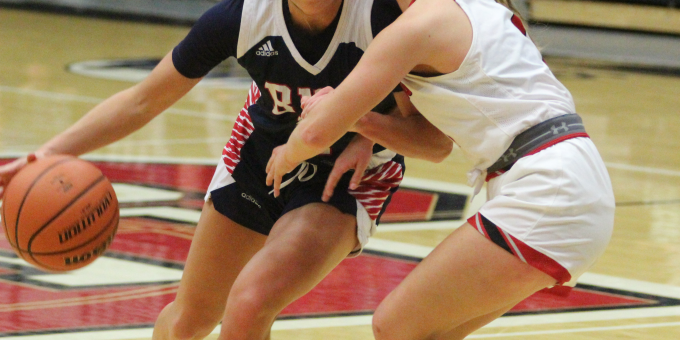 ST. LEON – In a hair-on-fire hurry, and going nowhere quickly, Bedford North Lawrence needed a basketball sedative. The heart rate was soaring, the East Central crowd was roaring. Upset alarms were blaring. Who had the ice-water nerves to douse all that negative energy? Not the usual suspect.

Emma Brown, left alone on the left wing in front of BNL’s bench, waited impatiently for the ball to be reversed to her side. Her defender had leaked into the paint, 18 feet away. Brown fired, swished, and put out the fire.

Brown’s critical 3-pointer, midway through the tense fourth quarter, gave the Stars a huge boost toward the finish line as No.7 BNL escaped, limping a little from all the scratch marks, with a 41-37 victory in its final regular-season road trip on Saturday afternoon.

Chloe Spreen scored 20 points as BNL (19-3) survived a third-quarter offensive meltdown – only two points – to conquer the Trojans (14-10) for the ninth straight time in the series. But no shot was bigger than Brown’s, whose only basket gave the Stars a 32-28 lead. Moments later, Spreen scored to push the margin to six, and BNL finished without much stress after that.

But before that, there was plenty. East Central played the tempo card, making possessions long and tiring. On the flip side, BNL got in a hurry to counter and run away. The Stars missed nine consecutive shots at one point, but the Trojans never got the lead. They got close (29-28) and had a shot in the air to go in front. But that’s the story of this series. The last seven meetings have all been single-digit battles.

“It’s the story of this matchup,” EC coach Kevin Moore said. “It’s a possession game.” And the biggest possession? “Brown’s shot,” he answered. “It’s like deja vu, all over again. Every time we play them, one of the role players steps up and hits a shot.”

Brown from downtown. Has a poetic ring to it. It’s also ironic for the senior, who was admittedly a little nervous to launch and connect with momentum in the balance.

“I was stressed,” Brown said with a smile. “Nothing was falling for us, it was getting kind of stressful. At the same time, we were trying to keep our cool.”

Spreen followed that dagger with a 10-footer in the paint, and her breakaway layup against East Central’s late and desperate pressure was the final nail.

In the first half, BNL was far from struggling. Karsyn Norman buried three silencer treys, scoring 13 points. If not for six BNL turnovers and two Josie Trabel bombs, BNL was probably a few shots from bolting. Instead, after rumbling to a 25-20 halftime lead, the Stars slipped and fell on the offensive end during the third quarter.

“They made it slow, made it ugly for us,” BNL coach Jeff Allen said. “You have to be able to play that style, when someone wants to slow the ball down. We had possessions where we were on defense for quite a while, then take a quick shot or turned it over. You can’t do that in that situation.

“We kind of got frazzled after the first quarter. We took quick shots that weren’t great shots. It wears on you mentally, and maybe it affected us. It’s a tough game for us to play, because we like to play fast. We have to get better from the standpoint of being more efficient.“

Trabel, a Wofford recruit and a BNL thorn during her entire career, had 13 points and 11 rebounds. She was held to only 3 points in the second half. Laney Baker took up that slack with 14 points. East Central’s biggest issue, in a game the Trojans intentionally backed off the pace pedal, was 17 turnovers.

“Defensively, to hold them to 41 points, was exactly what we needed to do,” Moore said. “They average 64 points a game, and that’s not something we’re able to do this year.”

After the BNL ballhandling problems in the first half, the Stars finished with only 9 turnovers. Mallory Pride had 8 rebounds. The lessons learned? “Don’t stress in situations like that,” Brown said.

“You have to give the kids credit,” Allen said. “They found a way to get it done. You’ll run into games like that, where teams want to slow you down, and you just have to figure out how to get it done. It’s a great game going into the tournament. You have to gut it out, it won’t be pretty.”

The Stars will host Martinsville, and celebrate Senior Night, on Thursday.