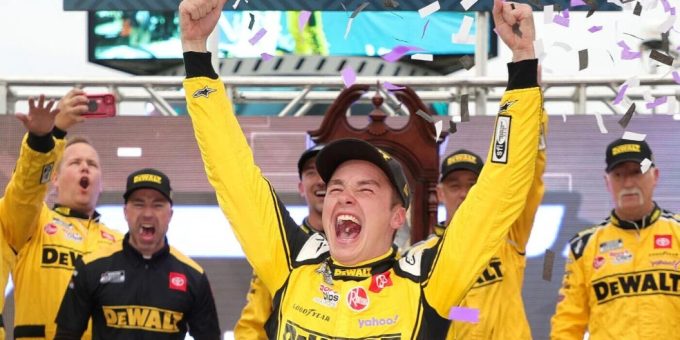 MARTINSVILLE, VA. – After taking four tires on his final pit stop, Christopher Bell ran down Chase Briscoe with four laps to go, making the pass on another driver in a must-win scenario and then pulling away to win the Xfinity 500 at Martinsville and put himself in the Championship 4.

His margin over second-place Kyle Larson was .869 of a second.

There were six caution periods for a total of 53 laps. Only 17 of the 36 drivers in the Xfinity 500 finished on the lead lap.

Bell will join Chase Elliott, Joey Logano, and Ross Chastain in the Championship 4.

In a last-ditch effort, Chastain went full throttle into Turns 3 and 4 and put his car on the wall, riding it at full speed and passing five cars – including Denny Hamlin – by the checkered flag. The move put Chastain in the championship round, knocking Hamlin out of the final Championship 4 spot by one point.

After taking the lead thanks to a quick pit stop by his crew under caution, Bell came to life over the final 200 laps, and he was leading when a crash by Landon Cassill brought out the final caution of the day with 34 laps to go. While Bell brought most of the leaders to pit road, Briscoe — who was also facing a must-win scenario — stayed out with teammate Cole Custer, and several two and no-tire stops dropped Bell back to sixth in the running order by the restart.

But eventually, Bell’s fresher tires prevailed, and he was able to run Briscoe down in the closing laps and pull away in a repeat of his Charlotte Roval heroics.

Hamlin, Briscoe, Ryan Blaney, and William Byron were all eliminated from championship contention.

Briscoe’s ninth-place drive secured his ninth top-10 of the season and his second top-10 in four career NASCAR Cup Series starts at Martinsville. He also finished ninth in the series’ prior race at the track in April.

“Yeah, that was kind of the only play I felt like we really had. I was honestly surprised nobody else stayed out in front of me. We couldn’t really pass all day long, so we knew if we restarted eighth, where I think we were running, we probably would’ve run seventh or eighth,” said Chase Briscoe, driver of the No. 14 Rush Truck Centers / Cummins Ford Mustang. “I thought it was going to work for a second. I thought if the race was 10 fewer laps, I was probably going to win, but I just fell off a cliff really hard there at the end. It’s unfortunate, but I had a shot. The penalty early in the race killed us. As I said, it was really hard to pass, and had to scrap and claw position by position it took us a really long time to get back up there, but I thought our car was pretty good toward the end. It would’ve been nice to be on even tires, for sure. I felt like we had a car capable of running up front and battling for the win, but that was really the only play we had left. It’s frustrating. The penalty really took us out of it. You just couldn’t pass. We were running third or fourth and got the penalty and went back to 18th and literally ran 18th pretty much the rest of the day until we were able to get one spot at a time on restarts, so win as a team, lose as a team. Those pit crew guys kept me in the playoffs a lot of the time. I don’t think we really had a pit-road penalty all year long and it came at this race, but we’ll go on to Phoenix and try to redeem ourselves. I felt like in the last six races we’ve had five top-10s, so this is the kind of speed and momentum we need to have to go into the start of next year. I feel like we’re really hitting our stride, so that’s encouraging. I feel like we’re more than capable of being a top-10 team every week, it’s just a matter of putting it all together and we’ve been doing that a lot better at the end of the year.”

Briscoe finished fifth in Stage 1 to earn six bonus points. He led once for 25 laps – his first laps led at Martinsville.

Custer collected his 10th top-15 of the season and his second top-15 in six career NASCAR Cup Series starts at Martinsville. He Custer finished third in Stage 1 to earn eight bonus points and fourth in Stage 2 to earn seven more bonus points.

Almirola captured his 16th top-15 of the season and his 12th top-15 in 28 career NASCAR Cup Series starts at Martinsville.

Since joining SHR in 2014, Harvick has only one finish outside the top 20 at Martinsville, a span of 18 races.