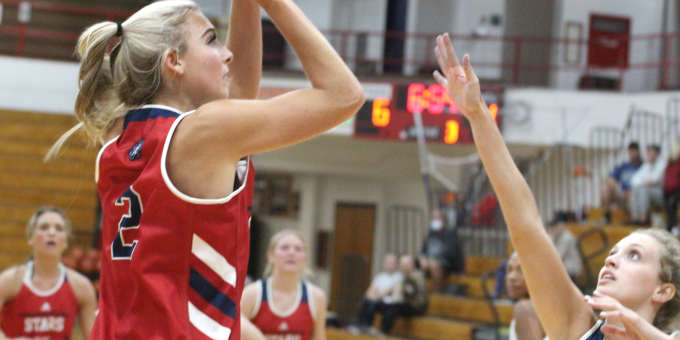 BEDFORD – The preseason is basketball’s version of the Marvel Cinematic Universe. Phase 1 is the intrasquad scrimmage, the introduction of the heroes. Phase 2 is the IHSAA sanctioned scrimmage, the setup for looming dangers. Phase 3 is when the real battles begin.

The Stars briefly unveiled the trailer for the 2022-23 campaign. If the two quarters of varsity competition are an indication of the story ahead, BNL has a major hit on its hands.

Team Red earned the rave reviews, rolling to a 28-13 victory over the White squad on Tuesday night. Chloe Spreen and Karsyn Norman, working together rather than facing one another during the normal practice sessions, ignited a 20-0 run that left the White a little black and blue.

Spreen had 13 points, and that’s expected. Tori Nikirk had 8, and that’s not – yet. But it proved BNL coach Jeff Allen’s belief of depth and offensive potential.

“I feel we have more depth this year,” Allen said. “I won’t be worried about putting those kids in situations where I need them. That’s a nice feeling to have. I’ve been really happy with this bunch. We’ve got some execution things to work on, but we have so many different options of kids that can score. I’m really pretty pleased.”

The White surged early, with Mallory Pride netting a lane runner and an 18-footer for a quick 6-1 edge. But then the Red erupted.

Treys from Haleigh Canada, Nikirk and Norman ended the first quarter. Three straight slashing baskets by Spreen (two off sharp Norman passes) kept the run going. NIkirk added a breakaway off a steal and Spreen swiped a rebound and scored.

“We played hard, both teams,” Allen said. “The Red took a while to get in the groove, but it’s tough playing against each other in these things. That’s why I put Chloe and Karsyn together, they beat up each other every day in practice. They’re both on a mission They realize we have a chance to do something special this year, with a little luck along the way.“

Pride finished with 5 points and Emma Brown added 4 for the White.

Scrimmages are really just glorified practice sessions, going ‘live’ rather than the necessary but mundane drills. Norman has now been through four of these.

“We always dread this,” Norman said with a laugh. “We’ve played against each other for so long, and now we have to do it in front of a bunch of people. But it’s a good thing for us. It’s fun to beat up on each other, but we’re all ready to play against different people.”

That’s Phase 2. BNL will visit Scottsburg on Thursday for the second step in the preseason workouts.

“I’m going to focus on our defense,” Allen said of that test. “I think we’ll be able to score points. We’re a little smaller than most teams, so we have to be able to stop people. I want to see that we’re where we need to be. Are we playing hard and giving the effort? This bunch has been easy to coach so far.”

“I want to see a big win,” Norman added. “We’ve been working really hard and I want to see it pay off. Scottsburg is a good team. If we get a big win, that will start us off for the season.”

BNL is scheduled to host Mooresville for the season opener on Nov. 4. That game will be moved forward to Nov. 3 if Mooresville or BNL win their football sectional semifinal this week.