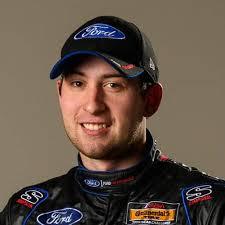 TEXAS – Chase Briscoe, the driver of the No. 14 Rush Truck Centers/Cummins Ford Mustang for Stewart-Haas Racing (SHR), is riding a wave of momentum heading into the AutoTrader EchoPark Automotive 500 at Texas Motor Speedway near Fort Worth.

“The teams have probably all got their cars handling better since we’ve last been here, but I wouldn’t expect anything different,” said Briscoe. “We’ve tried some different things with PJ1 and resin, but I don’t know if you’re going to all of a sudden see different racing in Texas. At places like Charlotte, where it’s worn out and the track is aged well enough to where we can move around, we put on really good races. Even with the resin at Texas, I just don’t know if it’ll make a difference because the track surface is pretty new.”

In only his second year of Cup Series competition, Briscoe has advanced to the Round of 12 of this year’s NASCAR Playoffs, which begins with Sunday’s 334-lap race at Texas, then heads to the 2.5-mile Talladega (Ala.) Superspeedway Oct. 2, and concludes Oct. 9 at the year’s final road-course race on the Charlotte (N.C.) Motor Speedway Roval. Briscoe begins the Round of 12 just four points below the cutline to advance to the Round of 8.

“The second round has tracks that are wild cards. Talladega is anyone’s race, the Roval really can be the same, and Texas you’re going to have to be good in qualifying to get track position and maintain that all day,” added Briscoe. “I feel pretty good about Texas. Our mile-and-a-half stuff has gotten better, but track position is key. We can’t make mistakes and we’ll have to be good from the start, then race the track. If we can get through Texas and Talladega, I feel good about the Roval, too. You could look back at our finishes and say I wasn’t good at some of these places, but we were in a different situation then and we’ve made a lot of progress.”

Briscoe’s lone points-paying Cup Series start on the 1.5-mile Texas oval came last October, when he brought home a 15th-place finish. He also competed there in the 2021 All-Star Open, in which he finished fourth, and the 2022 All-Star Race, which resulted in an 18th-place finish.

The sum of Briscoe’s results on intermediate tracks this year isn’t indicative of the No. 14 team’s capabilities. Only two of his finishes on tracks that fall in that category were top-five or better – his first Cup Series victory earned on March 13 at Phoenix Raceway in the fourth race of the season, and a fourth-place result on May 29 in the Coca-Cola 600 on Charlotte (N.C.) Motor Speedway.

However, Briscoe was also a contender at Las Vegas Motor Speedway in March, and the June races at Gateway International Raceway near St. Louis and Nashville (Tenn.) Superspeedway, before a series of events, derailed his performances.

In the NASCAR Xfinity Series, Briscoe has two top-fives in five starts at Texas with the best finish of second in March 2020. He also competed in two NASCAR Camping World Truck Series races at the track, finishing second and fourth in the 2017 events.

This weekend in Texas, Briscoe’s Rush Truck Centers/Cummins Ford Mustang will carry the name of cancer hero Ann Tidwell, mother of SHR employee Jason Tidwell, as part of the Martin Truex Jr. Foundation’s Honor a Cancer Hero program. Ann’s love and compassion for others were exemplified in everything she did even through her battle with ovarian cancer.

Indiana-based Cummins, from car owner Tony Stewart’s hometown of Columbus, is a corporation of complementary business segments that design, manufacture, distribute and service a broad portfolio of power solutions. It is best known for its diesel truck engines. Since its founding in 1919, Cummins has grown to employ approximately 61,600 people and serves customers in about 190 countries and territories through a network of some 8,000 wholly owned and independent dealer and distributor locations.