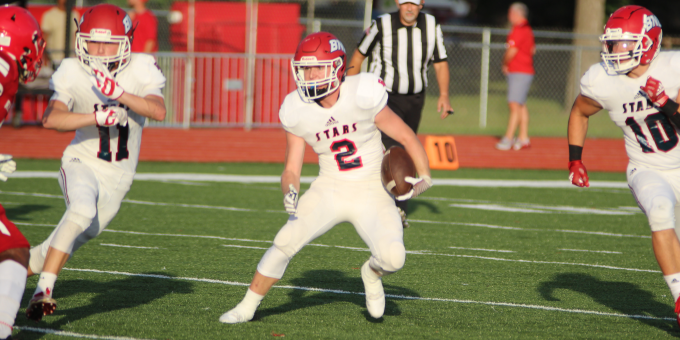 BEDFORD – On a wing and prayer, Jennings County football has started another rebuilding. That’s been a tough process, with four head coaches in five years, with another agreeing to take over (twice) then rejecting (twice) the position during the last offseason. That’s the situation inherited by T.J. Newton when he was finally hired in the spring.

Newton, a former assistant at Maconaquah and (appropriately) North Newton, has introduced the classic, old-school Wing T offense, a run-heavy system based on misdirection. When rebuilding, when looking to establish success in a program that has enjoyed only one winning season since 1997, start with the basics. Few teams run that attack, which makes it difficult for an opponent to prepare.

Bedford North Lawrence, with its wings clipped last week, will test its defensive discipline and mental preparedness when the Stars journey to North Vernon on Friday night.

The Stars (2-3 overall, 2-1 in the Hoosier Hills Conference) were flying high, leading the league, until suffering a disappointing 27-6 home loss to Seymour. Perhaps they got caught looking too far down the road. Now, if they get caught peeking in the JC backfield, they’ll be chasing the football down the road.

That’s the Wing T in a nut shell. Fake it one way, run it another, spread the carries to multiple backs, disrupt the reads. Fool me once, shame on you. But fool me twice . . . .

“If you get caught staring in the backfield, trying to find the football, next you thing you know someone will be hitting their head on the goal post,” BNL coach Derrick Barker said. “It’s not about talent, size or speed, it’s about being disciplined. You have to read your keys. It keeps you honest.”

“Overall, the team has worked really hard transitioning to the Wing-T and the physical style of football we want to play,” Newton said. “I think the hardest transition has been up front. We’ve asked guys that were zone and pass blocking their whole high school career to change gears to more attacking and down blocking. I think they are starting to catch their stride and figure some things out.”

BNL was trending toward figuring it out, until taking a step backward during the loss to Seymour that ended a modest two-game streak. The Stars struggled on offense, gave up two touchdowns late in the first half on two explosive plays, then allowed the Owls to march 80 yards twice to begin the second half.

“We knew Seymour would do things to give us trouble,” Barker said. “By no means did I expect us to roll over them. But there was a surprise about coming out without full energy. I have to do a better job of coaching, at the end of the day, making sure they’re ready to go from the first snap.

“It’s something we’ve focused on this week. When the game starts, we have to be ready to go, it doesn’t matter who we’re playing or how good they are. We have to make sure we play hard with our ‘A’ game. The big thing is focusing on little things. We had a lot of little mistakes, things that are Day One things. Alignment, some spacing, the blocking techniques. We have to address those issues.”

Louden (51 of 109 passing for 601 yards this season) will look to refire that offensive magic. The Stars have scored fewer than 20 points in four of five games. BNL’s defense will face a team that scored 33 points last week against Madison and 46 during JC’s lone win (at Brown County).

“BNL starts eight seniors and three juniors on defense,” Newton said. “Five of their six guys that form the ‘stack’ are seniors. I think if you can do that in your program, you have a good shot of keeping points off the board.”

BNL leads the series 42-7 and hasn’t lost at Jennings since 2002. That’s a lot of history in BNL’s favor. Jennings is more worried about the present and the future going forward.

“These seniors have heard three different voices in their four years of high school football,” Newton said. “The program needs stability, discipline, and high standards. We’ve done a lot of work on that front, and we are starting to see some improvements in different areas. Over time, work always win, and we have to embrace that hard-working, blue-collar identity. It will take time, but we will get there.”

Game notes: Jennings has had one winning season (2015) since 1997. Newton is the fourth JC coach in the last five years.