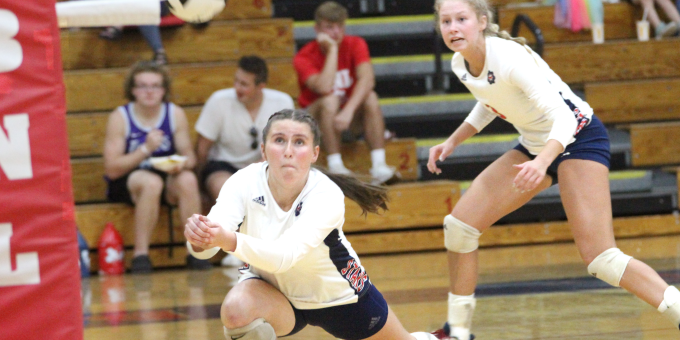 BEDFORD – The clean points, the dirty points. The perfect points, the scramble points. Mishits or pure hits, Bloomington South won all types. And when it Raine-d, it poured.

With Raine Rolen raining down kills at the net and digging out balls on the back row, with setter Paige Washington dictating the tone for her hitters with quick-set balls on top of the net, the Panthers pounded out a three-set sweep of Bedford North Lawrence on Tuesday night.

Seniors did most of the damage for the Panthers during a 25-22, 25-14, 25-19 triumph. Rolen was the main finisher up front with 9 kills, and Washington dished out 18 assists while sparking South (6-10) to its second straight win. The Panthers had just ended a four-match skid with a victory over city rival North, and that enthusiasm carried over during the conquest of the Stars (2-15).

BNL, which never owned a serious lead in any set, had its best shot in the opening frame. The Stars fought within a single point multiple times, the last at 19-18. South worked that one out with late kills by London Mitchell and Caitlin Helm, and the Panthers pulled away to comfortable working margins in the final two sets.

“I would hope we’re the best 6-10 team you’ve ever seen,” South coach Melissa Smith said, although it’s doubtful such a poll exists. “There was a lot of senior leadership.”

Rolen added 12 defensive digs to her offensive assault. Other seniors got involved, including Riley Walker (21 digs), Cadence Ast (3 aces) and Helm (7 kills). Mitchell was also key with 12 assists and 11 digs.

”They were a very scrappy team,” BNL coach Whitney Carroll said. “When we move and make those awesome plays, good things happen like that. We both had our fair share of scrappiness, but they take the cake. They did not let a ball get down. It was difficult to find the floor.”

The major difference in the teams? South was quite adept at the quick set in the middle (with the set barely getting above the net for a straight-down spike, very difficult to defend when timed properly), while BNL was constantly hitting from four feet off the barrier. Angles make a big difference.

“We really like to get the middle involved quick,” Smith said. “It opens everything up on the outside.”

“We’re hitting the ball too far off the net,” Carroll said. “They can do it. They have beautiful moments. Then we just sit back and go into idle mode.”

BNL’s margin for error, with no hard-hitting thumper up front to stop scoring runs or create fear, is slim. Any mistake, especially the missed serves that act as a cold shower on momentum, is magnified. “Every point matters all the time,” Carroll said.

The Stars had moments. Camryn Anderson had 16 digs and 3 kills, Sammie Gratzer had 9 kills and 3 blocks, Hayley Davis totaled 5 kills and 10 digs, and Annie Waggoner contributed 21 digs and 4 kills. Harley Tanksley (8 digs), Cali Mansker (5 digs) and Kendlyn Alvey (5 digs) did work on the back row.