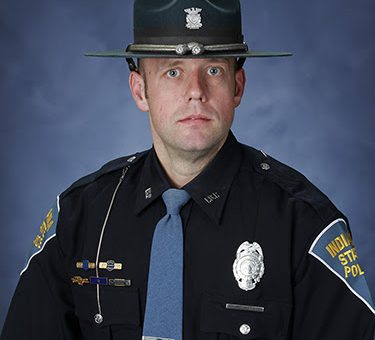 GREENCASTLE – Indiana State Police Superintendent Douglas Carter recently announced the promotion of Master Trooper Tim Rader to the position of sergeant. Sergeant Rader will be assigned to the laboratory division and serve as a Crime Scene Investigator.  His responsibilities will include field laboratory services and forensic support at crime scenes. Sergeant Rader earned this promotion through a competitive selection process.

Sergeant Rader is a 15-year veteran of the Indiana State Police. He is a 1999 graduate of Cascade High School, in Clayton, IN, and a 2000 graduate of Lincoln Tech in Indianapolis, IN, where he earned an associate degree.

In July of 2007, Sergeant Rader graduated from the 67th Indiana State Police Recruit Academy and was assigned to the Terre Haute Post and then the Putnamville Post where he worked as a road patrol trooper assigned to Parke and Vermillion counties.

During his career, Rader has served the state police as a member of the Tactical Intervention Platoon, marijuana eradication team, shore support for the dive team, recruit counselor for 77th recruit class, accident reconstructions and a small unmanned aerial system operator, and as a field training officer.

Sergeant Rader resides in Vigo County with his wife Shannon, and his two step-children, Alyssa and Jensen.