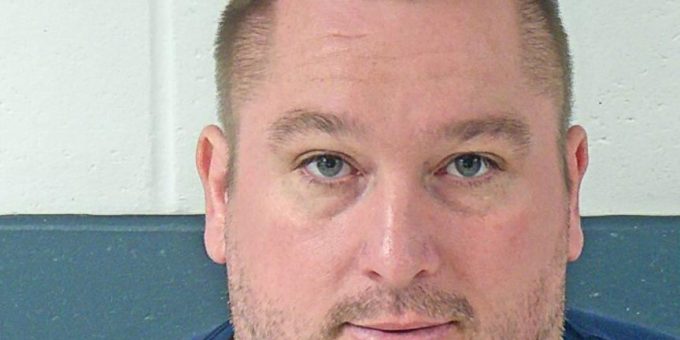 BEDFORD – A man was arrested after Bedford Police officers were alerted on September 9th at 1:14 a.m. to respond to a residence in the 1630 block of 22nd Street after a report of an unwanted male at the home.

The caller reported they were having ongoing issues with 39-year-old Phillip Fleener stalking and harassing their daughter.

When police arrived on the scene they found Fleenor standing on the sidewalk. He told police “He believed he deserved more respect” because “he was trying to get his kids’.

The caller told officers Fleenor was stalking and harassing his daughter. He stated Fleenor has come to the house numerous times. The family purchased security cameras for their residence because of the concerns they have about Fleenor’s actions. He told police that Fleenor had threatened to have one of his friends give him a gun because “he (Fleenor) can’t get one of his own”.

The male caller reported that he felt Fleenor “Was going to snap at any moment so he spoke to him nicely until officers arrived”.

The male caller reported he felt Fleenor was waiting for his daughter to arrive home from work.

The caller requested Fleenor be given a no trespass order from his property.

Fleenor commented, “even though we are in a relationship?” when police issued the no trespass order to him.

The officer told Fleenor “he was going to be blunt” and reiterated to Fleenor that he was not in a relationship with the woman. That is when Fleenor stepped toward the officer and said “you being blunt is disrespectful to my family, and don’t you disrespect my family.” He repeated himself multiple times before stepping back from the officer.

Fleenor refused to sign the issued no trespass order saying, “no, I’d rather just stay here and wait until she gets here and go to jail.”

Fleenor was told of the potential repercussions of his actions and he stated “that’s fine, I’ll go to jail every time.”

Fleenor then told the officer that he was aware that the woman has children because he has seen their photos on Facebook and the children “are the right age” from the time he had an earlier relationship with the woman.

Fleenor was then told again that he was not in a relationship with the woman and they do not have children together.

Fleenor left after he was told to leave the home and not return.

Officers stayed in the area to ensure Fleenor did not return.

A short time later, the woman arrived home from work and she told officers she would speak to them inside the home because she didn’t feel safe outside.

The woman told officers, that Fleenor had told her boss that they were going to elope. That same day Fleenor requested the woman to get into his truck. She told officers she was “nervous because she had rejected Fleenor’s advances”. The administration department of the woman’s employer advised her to leave work early to avoid coming in contact with Fleenor. Fleenor was placed on administrative leave due to his actions at work.

The woman told police she had received poems from Fleenor and he had placed a letter and a ring in her mailbox at home asking her to marry him.  The woman reported the incident and took the ring to the police department after it happened.

She told police she didn’t know how Fleenor found out where she lived, “But tonight was the third time he (Fleenor) has shown up at her home”.

The woman told police she was “terrified to leave the house because she feels like he is getting more desperate for them to be together”.

The information was forwarded to the Lawrence County Prosecutor’s Office and a warrant was issued for Fleenor’s arrest on charges of stalking and harassment.