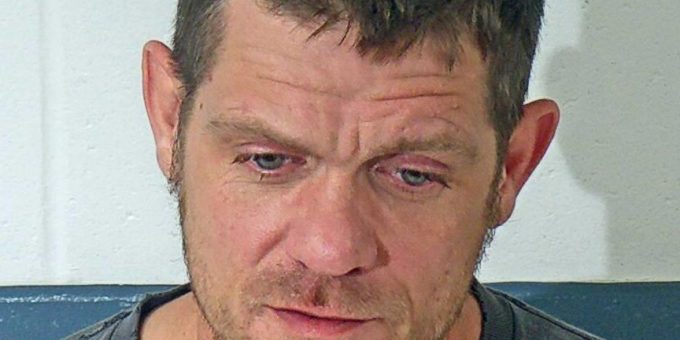 MITCHELL – A Mitchell man was arrested on Friday, September 16th after Lawrence County Sheriff’s Department deputies responded to a domestic fight in the 1430 block of Brown Station Road.

When police arrived they found a female standing in the front yard along with her young son.

The woman reported her son’s father, 38-year-old Jordan Taylor was intoxicated and struck her in the face. He then fled the scene on foot.

The woman said she was sitting on the front porch waiting for Taylor and her son to arrive home. The woman said she suspected that Taylor had been drinking. When Taylor pulled into the driveway she noticed he had thrown something out of the window. The woman located the item which was a 10-pack of shooters. There were only four remaining in the package.

Taylor and the boy entered the home through the back door where the woman met them. She said she could “smell alcohol on his breath”. She then went to retrieve the remaining shooters and took them inside the house to pour them down the drain in the kitchen sink.

After disposing of the alcohol, Taylor got angry and there was an argument. He then threatened the woman to “come over here and I’ll bash your head in”. Taylor then approached the woman and struck her in the left side of her face with a closed fist. The child began crying which distracted Taylor and she was able to step outside and call the police.

The woman signed a battery affidavit. At 11 p.m. dispatch received a second call from the woman saying Taylor was behind the house in the woods. Officers located Taylor and he was arrested on charges of domestic battery in the presence of a minor and intimidation.