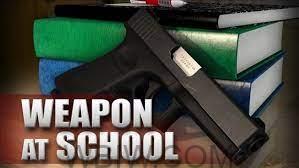 BLOOMINGTON – A Bloomington teen was arrested Tuesday at Batchelor Middle School when a school resource officer found a loaded 9mm Taurus handgun inside his backpack.

The 13-year-old had shown the weapon to several students on the school bus on their way to school.

A student on that bus then notified a parent, who then called the police at 8:03 a.m.

The gun was confiscated by the school resource officer and the teen was detained on charges of possession of a firearm on school property. A judge ordered the teen to be transported to the Johnson County Juvenile Detention Center pending a court hearing.