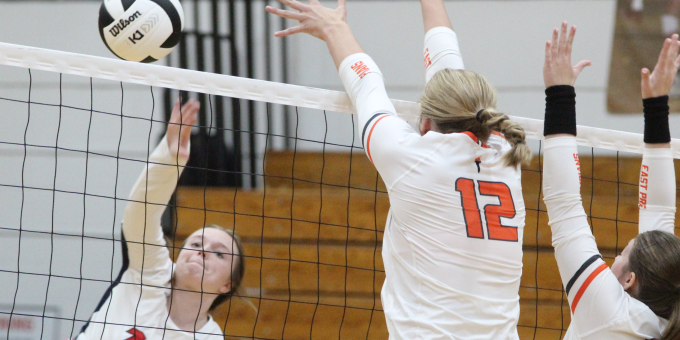 BEDFORD – The refrain is familiar, like an old song on the radio, or a favorite on the modern music service. You know the words, or hum along, perhaps even play air guitar or drum solo if the mood strikes. For the first half of each set, Bedford North Lawrence was a hit.

But by the second verse, the enthusiasm wanes, because the ending is known. The voice trails off. By the second half of each set, the Stars were trailing and suffering through another streaming lag.

After promising starts, the problem was sustainability. BNL couldn’t maintain the level of play as Columbus East pulled away to a three-set sweep on Tuesday night. The Olympians, with an intimidating frontline, powered to a 25-14, 25-15, 25-17 triumph.

Stop if you’ve heard this before. BNL blasted to a 7-4 lead, gave up six consecutive points, couldn’t recover the momentum in the first set. The Stars battled to a 10-10 deadlock in the second, gave up six straight points, pulled back. Same scenario in the third. Spurts of success, then lethal lulls.

“They were playing really hard, and they have spurts where we are high on that mountain. Then we dip into the valley, and some of them don’t come out of it. It takes six girls to play volleyball, all six working as one unit all the time. And when we lose a couple, that’s when things get really rough.”

The Olympians (8-7 overall, 2-2 in the Hoosier Hills Conference) had size up front that could erase a lot of mistakes. Maddie Cline had 14 kills, Caroline Frost added 8, and Gabby Dean – a 6-foot-4 force and Illinois recruit – came back from a recent injury absence with 4 kills.

Kenzie Foster added 20 digs on the back row and Erin Williams set up everything with 28 assists.

BNL (1-14, 0-4 in the HHC) is still facing more with less. The size differential, especially when Dean towered above the net, was overwhelming. But there were bright spots. Sammie Gratzer had 7 blocks and 2 kills. Annie Waggoner celebrated her 18th birthday with 7 digs and 2 aces, Camryn Anderson added 5 kills and 5 digs.

“Overall, I was excited,” Carroll said. “We played a great first half of most of those games., And we fought back at the end. There were a lot of amazing things.

“There are girls that want to be here, that play hard, that give their all every time. And there are girls that aren’t mentally tough. They shut down, and there’s something about that mental wall we can’t get through. If anybody has any advice on the bench, tell me. How to we get through to them? They’re just not confident.”

BNL will journey to Shoals on Thursday.