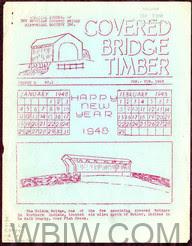 INDIANA – Some people know the difference between a Burr Arch, Howe, Queen Post, and King Post. They might also know the importance of the entrance to Brown County State Park. They might even be planning a trip to Parke County in October. Those people have covered bridge connoisseurs and know their covered bridge construction and history. Indiana is known for its 98 covered bridges, most clustered in the western part of the state.

In the late 1900s, a small group of covered bridge enthusiasts organized to save and promote the study of covered bridges, but the group slowly died off. So, in 1946 the American Covered Bridge Historical Society formed, continuing the promotion of the preservation of covered bridges, with the first issue of their official journal appearing the next year.

In May 1947, the first issue of the Covered Bridge Timber rolled off the press with messages from founder and treasurer George Aten of Muncie, first president Robert C. Finnegan of Lafayette, and a list of its 50 charter members.

Newspapers across the country printed articles about the formation of society and talked about the covered bridges in their states. The Society held its first annual meeting on Saturday, Oct. 11, 1947, at the Claypool Hotel in Indianapolis, and Sunday, Oct. 12, they toured several covered bridges in Owen and Putnam Counties.

Thereafter, each issue had information about members and their work, articles about covered bridges and their histories, as well as featuring well-known designers and builders. For example, the March 1948 issue has a list and map of bridges built by Archibald Kennedy and his sons in the southeastern part of Indiana.

The first eight issues of Covered Bridge Timber can be read in the Indiana State Library’s Digital Collection.