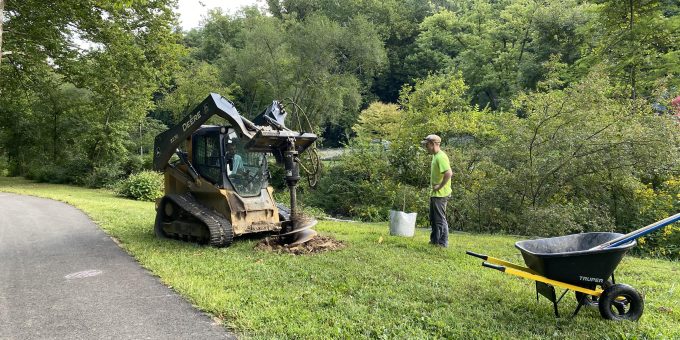 New energy-efficient LED, dark-sky friendly light poles were installed in Seminary Park this week and will be programmed in the coming weeks. The lights are controlled by automatic timers and provide lighting for the interior of Seminary Park.

The two-year downtown stormwater infrastructure reconstruction project to address flooding during rain events continues. Contractor Milestone is completing the new culvert under Grant St between Kirkwood and 4th and into the alley south of Grant.

Grant continues to be closed from 4th to Kirkwood. The alley on the east side of Grant, between Trinity Church and Longfei Restaurant, will remain closed.

The City will continue to coordinate with other construction and road projects as they reconstruct 1,829 feet of culverts to protect downtown area residential and commercial buildings. This project is on track to be finished by the February 2023 deadline. For more information about the project visit: bloomington.in.gov/utilities/hidden-river.

Businesses on 4th and Grant are still open as this project continues around them. They welcome customers and taking the time to visit them may afford residents an opportunity to see what’s happening with this project. Businesses in the impacted area include The Venue, Siam House, Little Tibet, Burma Garden, Korea Restaurant, Oak, My Thai, DO Asian Fusion, Dat’s, B-Town Gyros, Healthy Hoosiers, Bali Cafe, Storm Real Estate, Longfei, Parlor Donuts, Soma Coffeehouse, and Taste of India.

The project completed the demolition of eight buildings on the site with three buildings remaining. Material haul off for disposal and recycling will continue for the next few weeks. The next building scheduled for demolition is 635 Rogers Street.

The Hopewell Phase 1 East project site is bounded by 2nd Street to the north, 1st Street to the south, B-Line to the east, and Rogers Street to the west. Additional information about the project and the contractor can be found at the following links: https://bton.in/mRp~I, hopewellbloomington.org & renascentinc.com/

Due to the current demolition phase of the Indiana University Poplars Building on 7th Street, west of campus, N Grant Street will be closed between E 6th and E 7th from September 6th to September 20th. The sidewalks adjacent to the building will also be closed during each of these closures. Closures will be 24 hours a day.

The Crestmont traffic calming project is beginning with the City Street Department ADA curb ramp replacement, and milling and paving of 12th and 13th Street. Installation of speed cushions and signs by the contractor will begin in the coming weeks. Traffic calming devices on 12th Street (Lindbergh to Monroe) and 13th Street (Illinois to Summit) were prioritized through the City’s Resident-Led Process of the Traffic Calming and Greenways Program (TCGP). Additional information about the project and the contractor can be found at: https://bton.in/6nWTt.

The City’s crosswalk improvement project at the intersections of 3rd and Grant Street, 11th Street and Blair Avenue, and Patterson and Isaac Drive has reached substantial completion. Improvements include marked crosswalks, accessible curb ramps, warning signs, flashing beacons, a median refuge island, curb bulb-outs, and other traffic calming features. Pavement Marking installation is in progress at all three intersections this week, and residents may encounter temporary traffic control at each intersection. Additional information about this project can be found at bloomington.in.gov/engineering/projects/crosswalks.

As a part of the ongoing construction associated with the redevelopment of the property on the south side of the street, 14th Street between Dunn and Washington will transition to one-way (westbound only) traffic starting September 8th and lasting through January 31, 2023. On-street parking along the north side of 14th Street will remain unchanged.