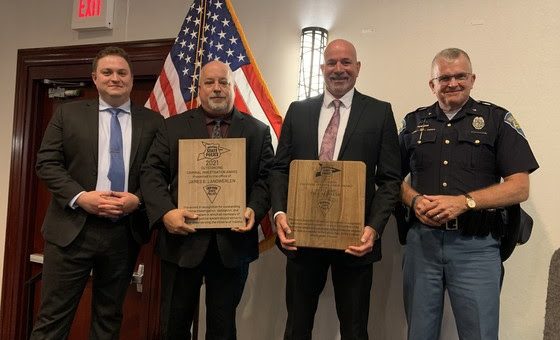 INDIANAPOLIS – On Wednesday, an Indiana State Police Detective and two members of the Shelby County Prosecutor’s Office were recognized by Indiana State Police Superintendent Doug Carter with the Department’s Outstanding Criminal Investigation Award for their work on several cold cases dating back to the early to mid-1980s, which ultimately led to an arrest in August of 2020 and a conviction this past March resulting in a 650-year prison sentence.

Between August 1982 and August 1985 there were a series of eight home invasions that included rape, unlawful deviate conduct, robbery, and battery which all occurred in Shelby County. As a result, a joint investigative task force was formed consisting of the Shelby County Sheriff’s Department, the Shelbyville Police Department, and the Indiana State Police. Although multiple leads were pursued, the original task force was unable to solve the investigation at that time.

In May 2002, Indiana State Police Detective Paul Baker was asked to review all the evidence in the above-stated incidents that might be eligible to be forensically examined using new technology.  In 2004, a new task force, which included Baker was formed to develop new leads to follow.

In July 2019, in an effort to seek out new, available technology, the task force contacted Parabon NanoLabs who specialize in Genealogical DNA Identification.  Based on information obtained from Parabon and a continued, relentless investigation, Steven Ray Hessler of Greensburg, Indiana was arrested in August of 2020.