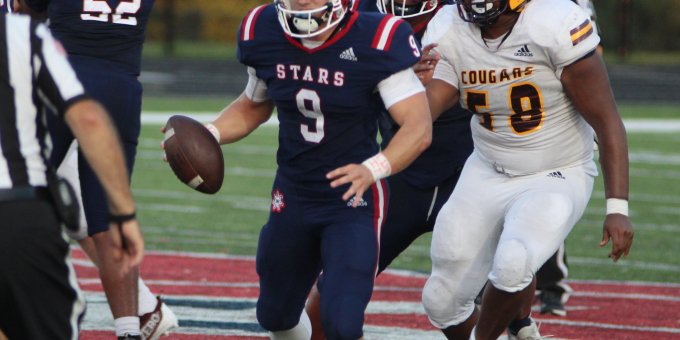 BEDFORD – The purpose of the Environmental Protection Agency, as the name suggests, is “protecting people and the environment from significant health risks.” Pretty basic, self-explanatory. Keep everyone safe and healthy. Sounds like a noble, important endeavor.

Bedford North Lawrence quarterback Memphis Louden understands that concept. His success depends on his personal EPA – the offensive line tasked with protecting the thrower and giving him time to locate receivers. If his environment is spoiled, he’s certainly facing significant health risks from those dirty defenders. Keeping him safe, healthy and clean is an important assignment.

As BNL prepares to visit Jeffersonville for the Hoosier Hills Conference opener on Friday night, that key facet – the game within the game – will be under the microscope. The Red Devils, who love to bring blitz heat, will unleash hell fire in pursuit of Louden when he drops back into the pocket.

Jeffersonville revealed its demonic intention during last week’s clash with Seymour. The question was not “if” the Devils would blitz, it was “how many” and from “where.” That’s the riddle BNL must solve as it seeks its first victory of the season.

“They’re aggressive,” BNL coach Derrick Barker said. “They’re sending guys, rushing five or six from the perimeter. They can hit you for a big loss, an explosive play in the wrong direction. We’ll have to pick up the blitz, see what’s coming and match their aggression.

“We’ll have to understand where they’re sending guys, get some first downs and keep the chains moving. We have to protect and get some explosive plays.”

During the first two weeks, BNL’s wall of forward security has been breached on occasion. Louden has avoided multiple sacks with his escape artistry, but that’s also why he’s been the leading rusher (27 carries, 122 yards). That’s why his passing percentage (27 of 59, 289 yards) and the offensive explosiveness have not yet reached expected levels.

“I don’t think it’s one thing, it’s a combination,” Barker said. “The biggest thing is getting all 11 guys together at once. We’re seeing open routes, but we’re not having time for Memphis to find them. We haven’t been able to run the ball, which is a big thing. That cures a lot of ailments. The big thing is giving him time back there. Once it all gels, we’ll see better results.”

Jeffersonville, with its scheduled opener against Bell County (Ky.) canceled for the second straight year, debuted last week at Seymour and suffered a 31-28 loss, giving up 13 fourth-quarter points (and 286 total passing yards) en route to that result. The Devils will feature power running back Zion Mansfield (who scored twice against the Owls) and junior quarterback Nik Schindler. Jeff churned out 430 yards last week, and did so with equality in both phases (230 on the ground, 200 in the air).

“They’re more balanced,” Barker said. “Mansfield is a load and looks a lot faster, he can move. And the quarterback is much improved. They’ve always got playmakers on the outside, so they’re dangerous.”

“Missing that first game always hurts, that’s two years in row,” Jeffersonville coach Isaac Parker said. “But I was very pleased with the effort last week. We executed very well at times. We still made mistakes. Penalties got us, and that’s something we can clean up as we progress through the season.”

BNL won last year’s clash 48-13, with Zane Anderson scoring four touchdowns, with Louden passing for 195 yards. The Stars also picked off two passes and held the Devils to 72 rushing yards in what was their most complete performance of that campaign.

Another question has popped up with BNL, one of health issues for key players. Wide receiver Ryker Hughes and linebacker Kaedyn Bennett will be back from illnesses, but the Stars will be minus Kline Woodward (awaiting a doctor’s test for an ailment) and Colten Leach (out indefinitely with an ankle injury). Plus there’s the usual assortment of bruises and bumps. The Stars will have to be physical to handle the Jeff attack.

“Defensively, we have to tackle,” Barker said. “It will be a four-quarter battle getting Mansfield on the ground. He’s able to bust one.”

“They’re always going to be strong, be well coached,” Parker said. “Any time I see a Bedford team, it will be a competitive game. And there’s a reason behind that. They’re always physical and they’ll execute. We have to do our job.”

Last meeting: Last year at BNL, the Stars rolled to a 48-13 victory. Zane Anderson scored four touchdowns and Memphis Louden threw for 195 yards for BNL. Davarhy Julian had 5 catches for 143 yards for the Red Devils.

Game notes: Jeffersonville has gone through six straight losing seasons but won a sectional title in 2020. BNL has won its last two games in Jeffersonville. The Stars haven’t started a season 0-3 since 2014.