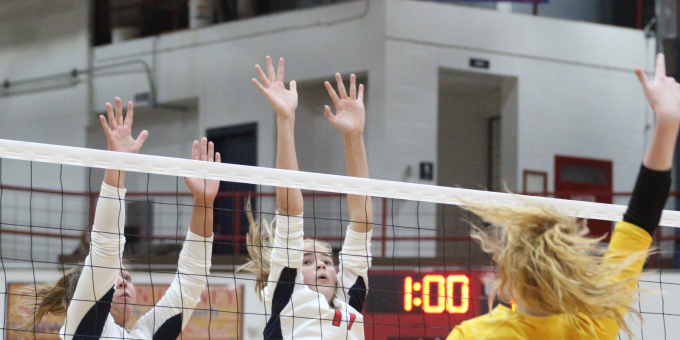 BEDFORD – Bedford North Lawrence now knows why the saddest words of tongue or pen are “it might have been.”

After playing two outstanding sets, holding late leads in both against a quality opponent, the Stars couldn’t close. Seeking their first two-match winning streak since the 2020 campaign, they got to the edge of greatness before backing off.

Scottsburg survived BNL’s best shots and posted a three-set sweep on Tuesday night, battling back to win those first two tight sets en route to a 25-22, 25-23, 25-11 victory. The Warriorettes (9-4) erased an 18-14 deficit in the first and BNL’s 21-18 lead in the second before blasting away.

Instead of an upset, the Stars (1-10) had to settle for ‘what if.’ The first two sets were the best stretch of volleyball BNL has put together this season. That’s both encouraging and frustrating.

“They were beautiful the first two games,” BNL coach Whitney Carroll said. “We’re going to focus on the positives. We had two beautiful games. We don’t need to talk about the third, because they didn’t play their game. Things are clicking. We just need to keep going and not stop.“

Even after the letdown in the first set, BNL came back blazing, roaring to an 11-6 lead in the next. Scottsburg rallied to pull even at 13-13, but Hayley Davis served two aces, Sammie Gratzer hammered back two blocks during a scintillating rally for the 21-18 edge, and the Stars owned a 23-22 lead when the Warriorettes missed a serve into the net.

But that was the final flurry. Scottsburg scored on a spike by Sophia Voiles off a block at the net, Chloe Mullins’ hard serve was misplayed, and Haiden Means dumped down the final point. In the third set, the Warriorettes took control quickly with a 5-1 start, then posted six straight points to a 13-4 advantage as BNL’s interest and execution started to wane.

“I was fighting to get them to believe this would be a tough match,” Scottsburg coach D.J. Zipp said. “I knew it was. I knew they would come out ready. I wasn’t happy with the way we played mentally, and we had low energy – until we needed to.

“We have to learn we can’t just turn the lights on when we’re down. We were lucky to win the first two, and that momentum carried us into three. But it could have gone the other way. We played when we needed to. In the third game we did a lot better job, served tougher and put some pressure on them, and everything came together. We finally played with some energy. But we can’t pick and choose when to play well.“

“We’re going to buck up and talk about winning the next game,” Carroll said. “They know what they did wrong. We’re going to show up and try with everything we’ve got to win.”

The Stars will journey to Floyd Central on Thursday.