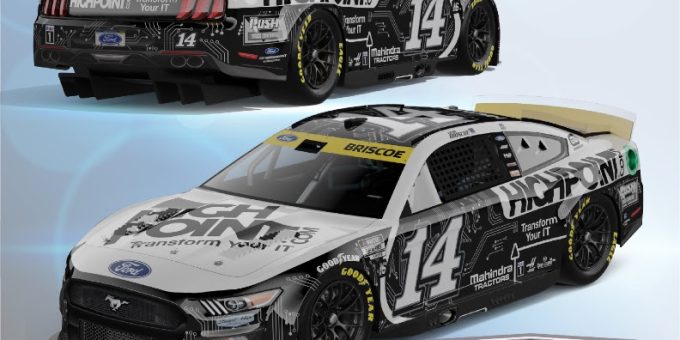 DARLINGTON, S.C. – As the NASCAR Cup Series returns to Darlington, South Carolina, Raceway for the second time this year, Chase Briscoe and the No. 14 HighPoint.com team for Stewart-Haas Racing (SHR) look to tame the 1.366-mile egg-shaped oval in Sunday night’s Cookout Southern 500, the kickoff to the 10-race Cup Series playoffs.

Darlington also marks Briscoe’s debut in the Cup Series playoff format. The playoffs begin with 16 drivers, including the 15 drivers who combined to win the first 26 races of the year.

Four drivers will be eliminated at the end of each of the first three rounds before the final four drivers compete for the championship on Nov. 6 at Phoenix Raceway, where Briscoe and the No. 14 team claimed victory earlier this year.

Briscoe starts the playoffs in the 12th position with a two-point cushion above the cutoff line.

Briscoe has three Cup Series starts at Darlington with a best finish of 11th in the May 2021 race. He also has three.

NASCAR Xfinity Series starts at “The Track Too Tough To Tame,” one of the most memorable performances of his career – his May 2020 win over two-time Cup Series champion and the winningest driver across NASCAR’s top three series, Kyle Busch.

This Sunday at Darlington, Briscoe will drive a black-and-white HighPoint.com Ford Mustang, eschewing the traditional blue-and-white colors of HighPoint for one of the crown jewel races of the NASCAR Cup Series – the Southern 500. The change in color honors the late sportswriter and 2016 Squier-Hall Award recipient Benny Phillips, who gave Darlington the moniker, “The Lady in Black.” No. 14 will also carry the name of HighPoint employee Joe Conforth.

Briscoe says it doesn’t make a difference on what track they race, if there isn’t a lot of tire grip, these cars are “really hard to drive”.

“And you add in the tire fall-off and that makes it worse. It was for sure a wreck fest when we were there in May, so it’ll be interesting,” said Briscoe said. “I think we know a little more about what to expect this time, but I don’t know what that means for how the cars will race. I hope we don’t have the same situation. We really can’t eliminate ourselves, and getting through that first race at Darlington will be important.”

Are the playoffs a chance for this team to start over?

“Truthfully, I feel like we’ve had speed every week but, unlike a lot of teams, we run anywhere from seventh to 12th for a lot of the race,” said Briscoe. “Then we finish 18th to 23rd. So, it’s definitely nice to have a little bit of a reset button. I know we have the speed, it’s just a matter of putting the whole race together. And you know, there are a lot of variables that determine what that means each week. I definitely think it’s a bit of second life to a certain extent, and one that I’m looking forward to having.”

Briscoe says it is a big difference between not being in the playoffs last year as a rookie, compared to being in this year with a chance to fight for a championship

“It’s a big difference,” added Briscoe. “It’s not so much that you don’t have anything to race for when you don’t make the playoffs, but there’s a big change in how your race weekend goes when that happens. You go to the track and the attention isn’t on you and your focus as a team is a little different. You still want to win races but you’re trying not to mess up another guy’s day and take away his shot at a playoff win, where now that’s us. We need the good days, we need the wins and you’re just hoping that you don’t do anything to take it away from yourself. And there’s more excitement now to get to the track. This team is excited. We know we can win, we did that at Phoenix, and we know if we can put things together one race at a time, we have a chance to be back at Phoenix competing for a championship. We’ve had a long time to think about how we’d handle things in the playoffs and now they’re here, so it’s time for us to execute, and I feel like we’re in a good place to do that.”