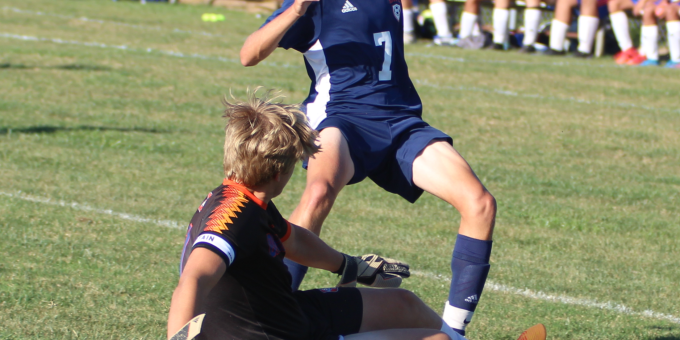 BEDFORD – Silver Creek had some retreat, but no surrender while catching Bedford North Lawrence in overlook mode.

With four starters missing while attending a senior retreat, the Dragons discovered new methods for a maddening 1-0 triumph over the Stars on Tuesday evening. Boaz Ndaruhutse’s goal late in the first half, and Luke Wilson’s impenetrable goal defense, were the highlights as Silver Creek adjusted to the absences for an impressive road win.

BNL (1-2-1) certainly had offensive chances, particularly during a second-half assault fueled by anxious desperation. Even with constant pressure, the Stars couldn’t find a crack in Silver Creek’s back line as the Dragons (2-3) posted the shutout and earned a shoutout.

“They played fantastic,” Creek coach Tim Quakenbush said. “The chemistry coming in, everything was awesome.”

Perhaps the Stars were guilty of looking a match ahead, with the Hoosier Hills Conference opener looming. Silver Creek’s goal got their attention, but the intensity came a little late.

“We had to start fast,” BNL coach Ryan Otis said. “We couldn’t let them hang around, and that’s exactly what we did. That’s on me. Our touch wasn’t there.”

The Dragons got on the board at the 7:20 mark. BNL failed to clear a deep ball out of danger, and Ndaruhutse – a transfer from Mississippi who had never played in a forward attacking position – got free at the top of the penalty box and slammed home the shot into the left corner of the net.

In the second half, BNL generated goal opportunities. Gavin Green’s 30-yard rocket cracked the cross bar with 33 minutes left, Grant Beyers executed a great free kick from 20 yards out, but the ball slid just under Billy Cline as he broke in from the left side with a lunging leg. Adriano Sullivan sent a sizzler toward the net that Wilson swallowed up. Those were the best shots, but not good enough.

“Their pressure was incredible,” Quakenbush said. “We’ve got a heck of a senior goalie.”

“We started to get frustrated from not scoring,” Otis said. “Once they scored, we started pressuring. That just makes it that much worse. When you start pressing, it starts to compound. Then communication breaks down. We played a little bit of hero ball, some guys felt they had to take the game over. It’s a team game.”

BNL will visit New Albany for the league debut on Thursday.