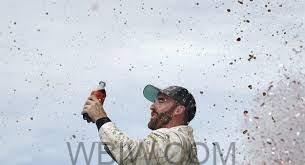 DAYTONA, FL. – Austin Dillon, of Richard Childress Racing, shoved Austin Cindric out of the lead with a few laps remaining and led the rest of the way, to capture the Coke Zero Sugar 400 and earn a berth in the Cup Series playoff, which begin next week.

The Coke Zero Sugar 400, was originally scheduled for Saturday but washed into Sunday morning.

Austin Dillon held the lead for 3 hours under the red flag at Daytona.

Just as the rain began to fall, a wreck involving 13 cars erupted in Turn 1. Dillon was right in the middle of it, but ducked to the low apron and kept his Chevy pointed forward. Somehow, he missed everything and everything missed him.

After some caution laps to guarantee the track’s readiness, the field went to green with 16 laps remaining, and Dillon soon settled into second place behind this year’s Daytona 500 champ, Austin Cindric.

With three laps remaining, Dillon charged to the rear bumper of Cindric and got the Penske Racing driver’s No. 2 Ford quite loose. Cindric bobbled and Dillon took the lead, and in his mirror was Childress Racing teammate Tyler Reddick. Dillon cruised to victory. Dillon’s margin over second-place Tyler Reddick was .128 of a second.

Dillon was the 16th different winner in the 26 NASCAR Cup Series races run this season.

There were seven caution periods for a total of 30 laps. Only 10 of the 37 drivers in the Coke Zero Sugar 400 finished on the lead lap.

Harvick qualified for the playoffs by scoring two wins – Aug. 7 at Michigan International Speedway in Brooklyn and Aug. 14 at Richmond (Va.) Raceway. This will be Harvick’s 13th consecutive playoff appearance and his 16th overall. He won the championship in 2014.

Briscoe qualified for the playoffs by winning on March 13 at Phoenix Raceway. This will be Briscoe’s first playoff appearance and it comes in his second season.

“Down on the back straightaway off of (turn) two, Joey (Logano) decided to go to the bottom, so I felt like following him was probably my best decision there,” said Chase Briscoe, driver of the No. 14 Mahindra Tractors Ford Mustang. “We got such a big run that I kind of shoved him out. I felt like if I could get up, I could maybe take the lead. Looking back on it, I should’ve just stayed behind and shoved him. He’s just really good around this place and is always there at the end. When I got up in front of the 48 (Alex Bowman), he started shoving me pretty hard through (turns) three and four and was getting me loose. He got to my left rear and that was a little bit on me just being lazy covering it and not knowing, and whenever we lost the banking out of four, it just spun me around. It’s unfortunate for my Mahindra Tractor guys. We kind of just rode around early in the race just trying to get to the end, and then once we got our track position, we were just going to try to maintain it. I don’t have a lot of experience leading races here and that’s what happens whenever you aren’t aggressive enough to make moves, so I just have to put it in the notebook and go on to Darlington next week to start the playoffs and start a good run.”

Cole Custer earned his 11th top-20 of the season and his second top-20 in six career NASCAR Cup Series starts at Daytona.

“That was a long day, but I appreciate the guys sticking it out and giving me a chance to make it to the end,” said Cole Custer, driver of the No. 41 Autodesk / HaasTooling.com Ford Mustang. “Our Autodesk/HaasTooling.com Ford Mustang doesn’t look as nice as it did to start this morning, but we gained 10 or 11 spots just by putting in the work to make it drivable after the wreck. I’m ready to get to Darlington and see what we’ve got next weekend.”

“It just raised the intensity to a pretty high level just because of the fact that you didn’t know when the rain was going to come. It was definitely a high intensity, but that’s what we expected today,” said Kevin Harvick, driver of the No. 4 Mobil 1 Ford Mustang.

“A few things didn’t work out. I was in position and there was maybe a move I could’ve made differently to try and get to the lead, but my help that was pushing me – the 17 (Christopher Buescher) – wasn’t clear, so I didn’t take the run. Looking back on it, maybe I wish I would have, but I would’ve just been in the lead and I would’ve been the first one to the rain, so I feel like I would’ve wrecked either way,” said Aric Almirola, driver of the No. 10 Smithfield Ford Mustang. “I just hate it. I obviously wanted to win so we could get our team into the playoffs, but we’ve still got a lot of racing left to do this year, and proud of everybody on our race team. I’m just thankful to Smithfield and Ford and everybody who supports this program. We’ll go race hard for 10 more weeks and get ready for next year.”

The next event on the NASCAR Cup Series schedule is the Cook Out Southern 500 on Sunday, Sept. 4 at Darlington (S.C.) Raceway. The first race in the 10-race NASCAR Playoffs starts at 6 p.m. EDT with live coverage provided by the USA and SiriusXM NASCAR Radio.