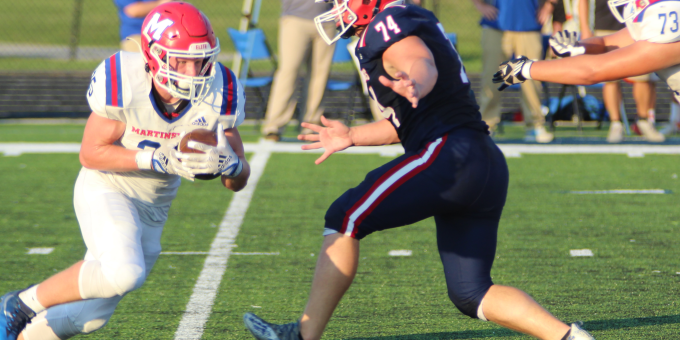 BEDFORD – Legendary college coach Bobby Bowden did not subscribe to the concept of “moral victories” during his career at Florida State. Those things, he proclaimed, are forgotten. And that’s true. Nobody pens epic poems or memorable songs about “almost.”

Bedford North Lawrence believes in the Bowden theory. Or to paraphrase Yoda, that galactic philosopher, “Win, or win not. There is no try.” There were positives to be noticed during the season opener for the Stars, lessons to be learned, mistakes to be corrected. But satisfaction? The scoreboard was the final authority, with BNL suffering a 28-14 loss to Class 4A No.17 Martinsville.

“I’m more about winning,” senior lineman Jett Jones said. “I don’t think you can get satisfaction from a loss. You just learn.” And with that in mind, the Stars are now looking ahead to Week 2, ready to tackle another challenge when they welcome Bloomington North to the home turf.

Looking back, the debut performance had noteworthy performances. BNL’s defense, a question mark that needed some answers in recent years, was solid. Colten Leach, sidelined for two seasons with knee injuries, sparkled in his first varsity action at receiver. BNL protected the ball much better than the 2021 clash (seven fumbles that day, none this time) with the Artesians. Looking ahead, that setback defined some concerns that must be addressed before tangling with the dangerous Cougars.

“There were a lot of things we did well,” BNL coach Derrick Barker said. “We didn’t play great, but we did a lot of little things we haven’t done the last couple of years. We had some good coverage plays on defense, we had really good effort on offense. We just couldn’t get comfortable, we didn’t do a good job protecting the quarterback or owning the line of scrimmage in the run game.

“If you can’t run the ball (BNL had only 96 yards rushing, the bulk by quarterback Memphis Louden in scramble mode), you allow the defense to pin their ears back. So we’re thinking about how we can stay balanced and get in a rhythm. We’re focused on what we can do to play our best game.”

Louden completed 18 of 29 for 189 yards and a touchdown, the scoring connection to Leach (who caught 6 for 101 yards). “It’s great having him out here,” Barker said. “He’s another weapon to add to the arsenal. Leach is really good at getting open. He might not be the fastest or flashiest, but he understands route concepts and where the holes in the defense are.”

During last year’s battle with North, there were holes everywhere. The Cougars exploded for 41 first-half points, although BNL came back firing during a 55-34 shootout loss. North quarterback Reece Lozano totaled 305 yards and accounted for three touchdowns, and running back Cody Mikulich ran for 124 yards and added four scores (including a kickoff return TD to set the tone for the offensive fireworks).

Lozano graduated, and Mikulich’s status is questionable (if not unknown) after he suffered a reported knee injury during North’s opening 38-13 loss to Class 4A No.3 Mooresville. Sophomore thrower Dash King has taken over at quarterback, and he still has a major threat in tight end Aidan Steinfeldt.

“They have size at receiver, they still have weapons,” Barker said. “They have plenty of guys who can make plays, a capable quarterback as a runner and thrower. Lozano (who signed with Indiana University) was able to make special plays. King is still a pretty good athlete. I would be surprised if Mikulich doesn’t play. He’s a really good football player. We’re expecting him to be out there. If not, we’ll adjust.”

BNL’s main adjustment for Week 2 will be keeping outside pass rushers from beating Louden to the backfield. The Stars finally found their footing but couldn’t convert in the red zone until the fourth quarter.

“We came out slow at first,” offensive lineman Garrett Hayes said. “We need to get better at coming out faster.”

“We need to get up on the ball more, run a faster pace,” Jones added. “I expect them to come out as hard as we will. We need to play all four quarters as hard as we can.”

North has won three straight in the series and 13 of the last 14. That’s a lot of heavy history and a tough trend to break.

“This is a team we haven’t beaten in a long time,” Hayes said. “So let’s beat them.”

“The kids weren’t down or hanging their heads,” Barker said. “We have our work cut out again, but a win would be huge for confidence.”

Last meeting: Last year at North, the Cougars scored 41 points in the first half while winning a 55-34 shootout with the Stars. Reece Lozano accounted for 305 total yards and three touchdowns, while Cody Mikulich scored four times for North. Memphis Louden threw for 279 yards and 2 TDs (both to Ryker Hughes) for BNL.