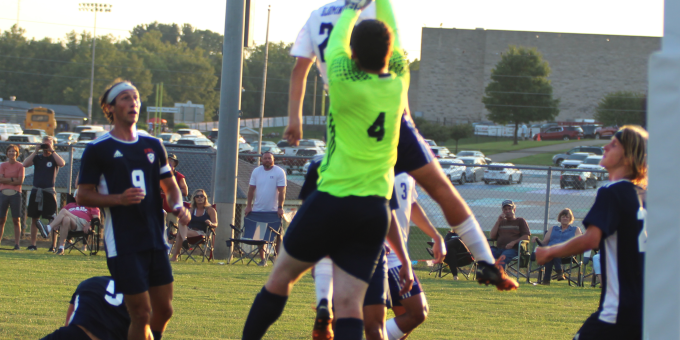 BEDFORD – When is a tie actually a win? When it comes against a rival that has dominated like a heartless, cruel Targaryen tyrant on the throne. For Bedford North Lawrence, the only thing sweeter than being equal with nemesis Bloomington South – ranked No.18 in Class 3A – would be being better.

But the Stars will take this, a 1-1 deadlock battle that felt far better for BNL, and much worse for the frustrated Panthers. For what is believed to be the first time, according to former coaches and soccer fanatics, since the sport was sanctioned by the IHSAA, BNL didn’t lose to South. Didn’t win, either. But hey, one step at a time.

BNL scored first, gave up a penalty kick for the equalizer, then played outstanding defense in the second half to earn the draw. First-year goalie Brayden Miller dodged a lot of bullets as the Panthers rifled 17 shots, hitting the cross bar twice with laser-beam rips. Perhaps that was part of it, some luck of the bounce. BNL’s goal was similar, a shot that hit the bar and dropped down over the goal line. Guess what? BNL will accept it.

“They’ve been beating us as long as we can remember, so the tie is great,” BNL sophomore Hiram Mullis said. “We tried our hardest. We’re really happy with the tie.”

Mullis was the offensive hero. After a BNL corner kick got deflected away, the ball squirted free to the top of the penalty box, where Mullis awaited. He gathered the loose ball and chipped the shot ever so gently over South’s goalie, and the ball clanked off the bar and into the front of the goal mouth with 33:16 left in the first half.

“I didn’t even know I scored,” Mullis said. “I just heard everyone cheering after I turned around.”

“That was huge,” BNL coach Ryan Otis said. “We thought we had to play our best to play with them. Getting that confidence, and being able to play the defensive game we’re set to, was perfect.”

South (3-0-1) spent the next 20 minutes in attack mode. Landon Ryner had two dangerous shots, one that the cross bar denied and one that sliced just wide. The Panthers finally were rewarded for the pressure when the Stars were called for a hand ball in the penalty box, and Sebastian Brena-Ochoac slammed home the penalty kick at 11:33.

In the second half, South had more chances, the most breath-holding moment being a loose ball near the net that Miller had to dive on with 4:30 left. He was a busy man.

“I had to do what had to be done,” Miller said. “I really wanted that first win against South. I felt like we deserved it. We played really hard. If we continue this level of intensity, we can beat most people. The sky is the limit.“

When the final buzzer sounded, as BNL’s Grant Beyers blasted a last shot for a miracle finish, the differences in reaction was stark. The Panthers had to be reminded that the ultimate disaster had been avoided, and the Stars had to keep from exploding with sheer ecstasy.

“That’s a pretty good tie,” Otis said, his club now 1-0-1. “That’s for the kids. They played their hearts out the whole 80 minutes. That’s what we’ve been stressing. The whole second half felt like an eternity. We know they’ve got a couple of guys that are dudes, we just had to stay in front of them. We did a good job of that. You can’t say we parked the bus and sat back. We had chances to score.”

South had been warned about this possible scenario. Last year’s regular-season clash played out in similar fashion as BNL scored two early goals before the Panthers rallied and won. The Panthers were also guilty of looking a little ahead to a looming clash with No.6 Castle.

“We can make excuses all we want,” South coach Corbin Calvert said. “At the end of the day, we were getting frustrated because we weren’t allowed to play the game we wanted to play. We just need to learn to adapt to those situations.

“We had 17 shots, and that part is on us. That’s the part we need to focus on and finish for the future. We have to move on. The good news is it wasn’t a loss.”

BNL will return to action on Saturday, hosting Bloomington North.