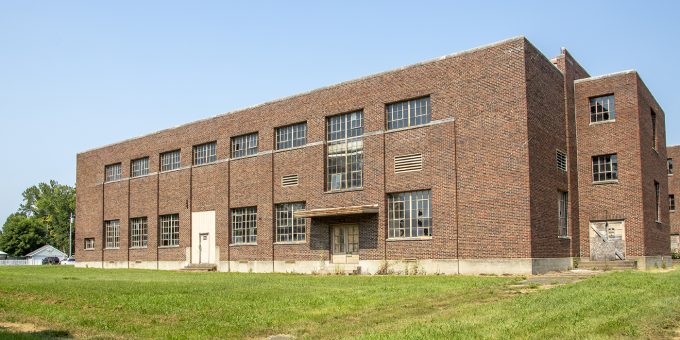 INDIANA – Every day, all year long, Indiana Landmarks works to revitalize historic structures that give communities visible connections to their past and lend irreplaceable visual character to the streetscape. Once a year, Indiana Landmarks announce the 10 Most Endangered, a list of historic places on the brink of extinction and too important to lose.

The list includes a church designed by a trailblazing Black architect; one of the state’s oldest covered bridges; an Art Deco skyscraper; a commercial block that embodies Indiana’s limestone legacy; a classic high school gymnasium; a long-vacant county home; a pre-Civil War brewery; a courthouse square anchor; an industrial bigwig’s neglected mansion; and the mid-century home of a pioneering African American real estate developer. These places shape lives, and when they’re gone, they leave a void that can’t be filled.

Included on the list is Shields Memorial Gymnasium on West 5th Street in Seymour.

The future remains uncertain for a temple of Indiana basketball in Seymour, first listed on Indiana Landmarks’ 10 Most Endangered List last year. One of Indiana’s largest high school gymnasiums when it was built by Works Progress Administration workers in 1941, the James M. Shields Memorial Gymnasium provided the backdrop for decades of local basketball memories, hosting 21 sectional titles from 1942-1970. A local family purchased the long-vacant property in 1996 and later had to demolish the seriously dilapidated 1910 high school nearby, leaving the gym as the last tangible school tie to the site for many Seymour alumni.

Today the gym remains empty. Vandals continue to break windows and cover walls with graffiti, despite the current owner’s attempts to secure the property. Though roof leaks have allowed water to infiltrate the building, an architectural assessment showed the steel and concrete gym to be structurally sound.

Community support for finding a new use for the Shields Memorial Gymnasium remains strong. The landmark gym occupies a city block on 5th Street in Seymour’s National Register-listed Walnut Street Historic District, surrounded by greenspace that opens up possibilities for incorporating the historic building into a new residential development.

Indiana Landmarks has engaged the owner, consultants, and the City of Seymour in discussions about the building’s future and possible rehabilitation, but a game plan for redevelopment has yet to be put into play.

Seymour’s WPA-era Shields Memorial Gym occupies a prime spot in the city’s Walnut Street Historic District, surrounded by open land that could make it a target for demolition and development.

Without action, Marion could lose a significant landmark designed by Samuel Plato, one of the early twentieth century’s most prominent Black architects.

When it was built in 1898, J.B. Birdsell’s mansion rivalled Clem Studebaker’s Tippecanoe Place and J.D. Oliver’s Copshaholm in opulence and prestige. Today, however, its ongoing neglect is cause for growing alarm.

Built in 1854, Fountain County’s Cades Mill Covered Bridge is the state’s oldest covered bridge still in its original location, but decades of deferred maintenance have placed the historic span in serious structural danger.

Built in 1954 on a prominent corner lot, Geter Means’ mid-century ranch house served as a focal point in Gary’s Means Manor neighborhood, but vacancy and neglect have transformed the property into a blight.

Hulman Building and Garage at 20 Northwest 4th Street in Evansville.

With handsome limestone facades and large storefront windows, four vacant commercial buildings in Stinesville hold potential for any number of creative reuses, but with each passing year, prospects for saving them fade.

After nearly 20 years of vacancy, Knox County’s historic poor farm is in desperate shape. Without repairs, the 1882 building faces demolition by neglect.

Kamm and Schellinger Brewery at 100 Center Street in Mishawaka.

The Kamm and Schellinger Brewery is the last of a once-thriving industrial area along Mishawaka’s riverfront, but there is increasing pressure to demolish the historic complex in favor of new development.

County officials have repeatedly discussed demolishing New Castle’s Courthouse Annex building and using the site for parking, a move that would rob the city’s courthouse square of its historic character.