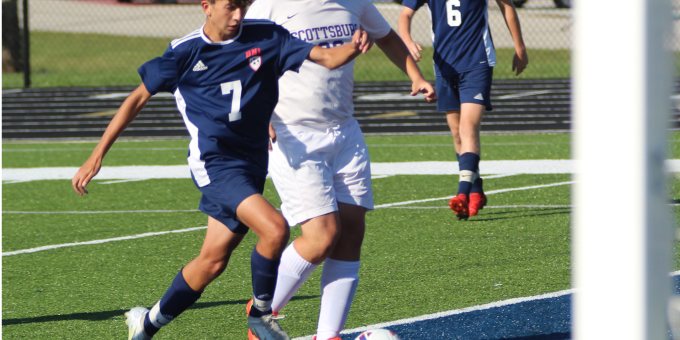 Six players scored goals as the Stars slammed Scottsburg 6-0 on Tuesday afternoon, winning the 2022 season debut on the turf field at BNL Stadium and celebrating a victorious debut for Otis at the helm of the program. He couldn’t have scripted it any better.

Rather than depend on singular attackers, BNL went the plural route. Adriano Sullivan recorded the first goal in less than five minutes, and that opened the floodgates on a four-goal first half and a complete, satisfying triumph.

“It feels good,” Otis said. “The kids played really well, especially in that first half. They played the way we wanted. They dominated on the wings and got crosses in. We executed as good as we could.”

Sullivan broke free for a point-blank shot at 36:55, then set up Gavin Green for a sharp shot from 10 yards out at 23:33. Karter West smashed one home at 9:35, and Billy Cline ripped home a free kick to cap the first half. In the second half, Carson Kelley directed home a header off Cline’s corner kick at 26:13, and Grant Beyers finished the scoring at 23:55.

“Our offense was clicking,” Kelley, one of the team captains, said. “There’s not one or two that stand out, but we’re good at working together and clicking together. Getting this win was a good way to start the season.”

Brayden Miller started in goal and didn’t have to pass many difficult tests as the BNL back line kept him clean en route to the shutout.

“Brayden communicated well,” Otis said. “We talk about that a lot. The team has really picked it up. The intensity was great in our intrasquad scrimmage last week, yesterday’s practice was really good. Hopefully we can keep this going.”

The Stars will visit county rival Mitchell on Thursday at 5:30 p.m.