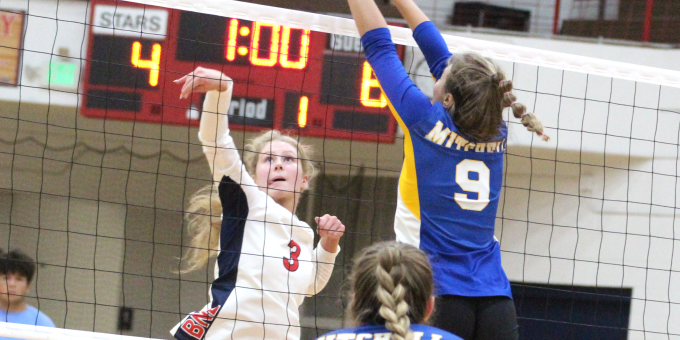 BEDFORD – When opportunity knocks, be ready to answer. That door might not open again.

Bedford North Lawrence had to hear that banging, the chance to stun the county rivals and take the lead in the season opener. That moment vanished, and with it went victory. Funny how that pair works in tandem. The Stars failed to capitalize. Mitchell took advantage.

Two serves to win the marathon first set, a fast 7-0 start in the second, and BNL won neither. The Bluejackets didn’t start well, but they sure finished while rallying twice to record a three-game sweep over BNL on Tuesday night. Mitchell (5-0) fought back for a 28-26, 25-16, 25-20 win before a huge throng in BNL Fieldhouse. What they saw lacked clean-play quality but definitely not drama.

The Stars (0-1) would later rue the squandered chances to inflict damage and seize momentum. They were down 9-4 early in that opening set, down 21-19 late, then forced the extra-length conclusion with the 25-25 deadlock. Mitchell dodged two bullets to take that set, then battled back from the 7-0 hole to dominate the remainder of the second. And the third set was similar, with BNL surging to a 20-17 lead before Taylor Lee hammered out the last seven service points to clinch the win.

“I didn’t like how we played,” Mitchell coach Scott Saunders said. “I liked how we finished games, but not how we played. Way too many errors. When you have a chance to stretch it, you can’t give it back. And we gave it back too many times.”

The key moment came during a timeout in the second set, after BNL had rolled to the seven-point advantage. Saunders spent the pause venting some frustration, and the Bluejackets responded with their best stretch.

“I wasn’t real happy during that timeout,” Saunders said. “It was ‘Let’s quit doing silly stuff.’ Quit hitting it in the net, tipping it out of bounds, doing things that cause us issues. From that point on, it was 25-9. If we serve the ball inbounds (Mitchell had 9 service errors total), we’re going to be pretty good. When we did, it was effective. We’ve got six servers that can serve.”

Anna Williams paced BNL with 6 kills, Camryn Anderson and Hayley Davis had 4 kills each, Isabelle Harding had 2 kills and Harley Tanksley had 2 aces.

“The thing we struggled with the most was all mental,” BNL coach Whitney Carroll said. “We got lax and thought it would be easy. We can’t do that. You can never coast in any game. You have to come out hard.

“We were very nervous. We played a little scared. And it’s Mitchell, so even if they were the worst team in the league, it’s still going to be nerve-wracking. All of my hitters can crush the ball, but in a game it’s mental. They play it safe because they think it‘s the right thing to do. It will take time.

“The cool thing about this team is they work hard, they do have heart, they hustle. We see improvement in every game.”

Saunders improved to 4-1 against his former program.

“My kids know I want to win this one, that puts extra pressure on,” he said. “Those kids wanted to win for their new coach, they wanted to beat the old coach. There’s a lot that goes into it. Sometimes it’s hard to be super clean. We’ll take the win.”

Both teams will return to action on Thursday. Mitchell will host Paoli in its PLAC opener, while BNL will travel to Brown County.