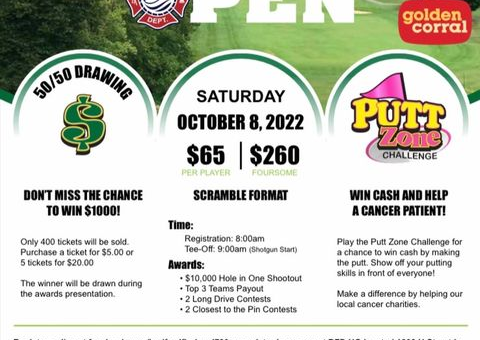 This golfing event on Saturday, October 8, 2022 is the biggest fundraiser of the year and makes everything they support and do throughout the year for charity possible.

This year lunch will be provided by Golden Corral Buffet & Grill. There will also be a Putt Zone Challenge that will support Lawrence County Cancer Patient Services.

Prizes will be given to the top three teams, a $10,000 prize for a golfer that lands a hole in one, the golfers with the two longest drives and two golfers will win for putts closes to the pin.

Get your teams signed up via Facebook or email at bfdlocal728@gmail.com.

Pay by cash, check, or PayPal for scramble teams and Sponsorships. https://www.paypal.me/local728.