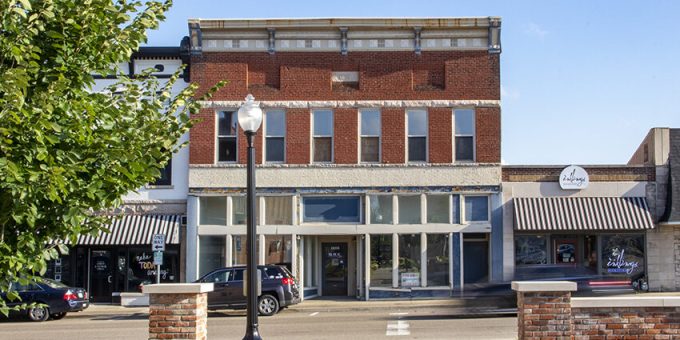 After saving the structure from demolition and stabilizing it, Indiana Landmarks and the City of Bedford are partnering to sell the building.

The building was constructed in 1898 for William Krenke, his brother Otto, and his sons who operated a livery stable in the two-story building. The business continued here until 1927. The second floor was a meeting hall space and in 1916 became a roller rink. The upper floor was later used as Woodman Hall. The first floor and basement levels later served a variety of automotive uses through the 1940s, including the local Buick and Pontiac dealership. In 1946 the Indiana Gas & Water Company occupied the building. By 1978 Goff Refrigeration Company occupied the basement and first floors. The second floor was used for storage

Recent improvements include a new roof and guttering. The Goff Building retains its pressed metal cornice, cast iron storefront pilasters, and limestone date plaque. The interior is ready to be built to suit and could house a ground-floor business with apartments above. The property includes a parking lot and a garage behind the building.

The property will be sold subject to preservation covenants held by Indiana Landmarks governing exterior improvements.

You can see more details and photos on the realtor’s website.