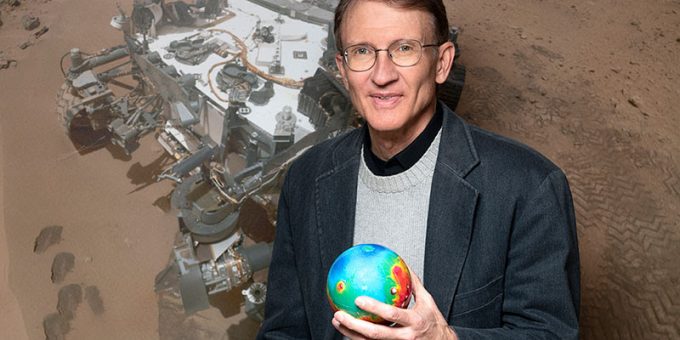 WEST LAFAYETTE — The first letter ever etched on the Martian surface is the letter L. Far from being an act of interplanetary graffiti, though, it’s there for scientific purposes. And it won’t be there forever – scientists plan to bring the marked rock home someday to be studied in a laboratory.

Roger Wiens, professor of earth, atmospheric, and planetary sciences in the College of Science at Purdue University and an expert in Mars robotics technology, led the team that built SuperCam, one of Mars rover Perseverance’s most innovative and effective tools. Recently, SuperCam used its laser to etch the first letter – L – on the Martian surface to learn more about Mars’ lost magnetic field.

“Humanity has only ever had one planetary magnetic field to study as recorded in rocks – Earth’s,” Wiens said. “Being able to study Mars – which we think once had an Earth-like magnetic field and lost it – will increase our knowledge by a whole new planet.”

Scientists on the Perseverance rover team are collecting rock samples – drill cores in cylindrical tubes – to be returned to Earth by the next mission. But to understand Mars’ magnetic field, they need to know how the sample was oriented when it was in the rock on Mars. The letter L is the easiest way – the way with the least number of strokes – to record how the rock was aligned on the planet. Scientists will compare the marking on the rock itself once it arrives on Earth with the marking as it was laid out in photos taken by the rover as it marked the rock. Comparing the rock sample’s alignment with Mars’ poles with qualities of the rock itself will give the researchers insight into the history of the planet’s magnetic field, which is currently very weak compared to Earth’s.