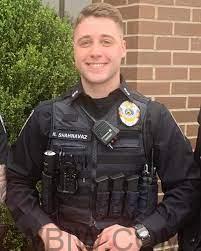 ELWOOD – The Elwood Police Department is providing the following information for the visitation and funeral services in honor of Officer Noah Shahnavaz who was killed in the line of duty.

Procession Route Information for the Funeral of Officer Noah Shahnavaz

For an unknown reason, the suspect, 42-year-old Carl Roy Webb Boards II, of Anderson, exited the Buick and fired multiple rounds striking the officer at least one time.

Before additional officers arrived, the Boards fled from the scene in the Buick.

Responding officers from Elwood Police Department and Madison County Sheriff’s Department located the wounded officer and administered life-saving measures until medical personnel arrived. The officer was transported by ambulance to Ascension St. Vincent Mercy in Elwood and later flown by helicopter to an Indianapolis area hospital, where he succumbed to his injuries.

Shahnavaz was a five-year veteran of the United States Army and proudly served the Elwood community for the past 11 months.

Just after 2:30 a.m., Hamilton County Sheriff’s Department located the Buick and attempted to initiate a traffic stop. The drive, Boards failed to stop and continued south on State Road 37.

Hamilton County Sheriff’s deputies continued to pursue the Buick and deployed a tire deflation device near the area of State Road 37 and 146th street. The Buick continued south on State Road 37 toward Interstate 69.

Boards was arrested on charges of murder, possession of a firearm by a serious violent felon, and resisting arrest. He is being held in the Hamilton County Jail without bond.

“A family, community, and state are devastated by the loss of Officer Noah Shahnavaz, a young public servant at the start of his law enforcement career. Not only did he choose to serve his fellow Americans for five years in the United States Army, but he also returned to Indiana to rededicate himself to serving and protecting others as a police officer for the Elwood Police Department. Our hearts go out to Officer Shahnavaz’s loved ones and his fellow officers. Janet and I send our condolences to all who are suffering from this senseless tragedy.”