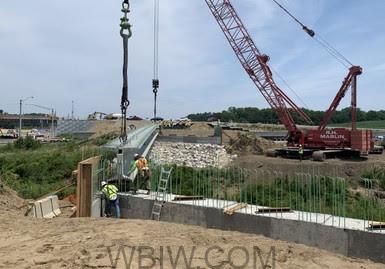 INDIANA – The I-69 Finish Line project is building and replacing dozens of bridges, and a few in Marion and Johnson counties recently had structural beams installed.

Cranes lifted the large concrete beams into place at night for the Mann Road bridge replacement over I-465 and the future I-69 northbound bridge over County Line Road. Crews have also been installing bridge beams for a new entrance and exit ramps over Bluff Creek at S.R. 144.

Drivers should stay alert during off-peak times for lane closures and nighttime traffic stoppages of up to 20-minutes as bridge construction continues.

Last week, crews opened the Madison Avenue bridge over I-465 to all four lanes and sidewalks. Drivers should stay alert for crews applying the finishing touches.

A bridge replacement project closed Carson Avenue yesterday at I-465 for about five months. The detour follows Keystone Avenue and Thompson Road.

Carson Avenue overpass demolition will require nightly I-465 lane closures and intermittent stoppages. The work will close and detour nearby I-65 ramps between 11 p.m. and 5 a.m. Click here to read more.

Expect a weekend closure of Banta Road at S.R. 37 starting Friday evening to lower the road beneath the future I-69 bridge.

County Road 144 is expected to open mid-week east of S.R. 37. I-69 contractors and the Johnson County Highway department replaced multiple drainage structures underneath the road.

S.R. 37 is expected to have nightly single-lane closures near S.R. 144 as crews remove temporary structures from the bridge piers.

Crews anticipate opening about 7 miles of S.R. 37 north of Henderson Ford Road this week to 55 mph and four lanes, two in each direction. The I-69 Finish Line project remains an active work zone under contract and police are enforcing the posted speed limits.

S.R. 37 will remain restricted to two lanes, one in each direction, near Myra Lane and Teeters Road for overpass construction, paving, striping, and temporary driveway removal.

Crews expect to connect the Morgan Street extension to the existing road and open the Teeters Road overpass in early August.

Expect nighttime I-69 lane closures and S.R. 252 ramp closures in Martinsville this week for final paving and striping work.