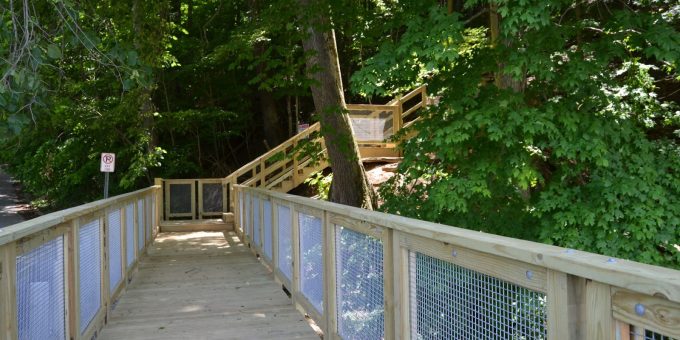 The Parks and Recreation Department will begin trimming overgrown trees and brush on the south end of the B-Line Trail south of Switchyard Park during the week of July 18. While the B-Line Trail will remain open, trail users are asked to exercise caution when passing Parks and Recreation crews working along the trail. One lane of the trail may close periodically to accommodate tree trimming.

The first .5-mile section of the Griffy Loop Trail, leading up a newly constructed wooden staircase on the steep slope south of the Griffy Lake causeway, is open for use. The natural surface trail follows the contour of the hillside and connects to the existing trails on the nearby IU Research and Teaching Preserve. Trail users are reminded to stay on marked trails, keep dogs on a leash, practice safe hiking, and leave no trace principles while using the trails at Griffy Lake.

The Waldron, Hill, and Buskirk Park

Repairs to the performance stage columns have begun. The project contractor is deconstructing the existing columns and is working with structural engineers to re-design and construct new columns.  Crews will be working in the park through August to complete the work.

Last week the contractor poured the top of the precast culvert section extending into Grant Street. They paved 4th Street and the parking lot at the Allison Jukebox Community Center on Washington Street. Duke and AT&T have completed their work in the alley between Trinity Church and Long Fei restaurant and telephone poles were removed. This week the contractor, Milestone, will be excavating between Trinity and Long Fei and pouring concrete curbs.

The City will continue to coordinate with other construction and road projects as they reconstruct 1,829 feet of culverts to protect downtown area residential and commercial buildings. This project is on track to be finished by the February 2023 deadline.

City of Bloomington Utilities will be doing restoration work on a drainage ditch and detention pond in Evergreen Village, off Susie Street. Weather permitting, the project will be complete in early August.

The City’s project to construct new traffic signals at the N Walnut Street intersections of 11th Street and 14th Street is expected to be substantially complete by the end of July.  Final work tasks to be completed over the upcoming weeks include final paving, installation of pavement markings, power hook-up coordination with Duke, and signal activation. This project also includes curb ramp improvements for the pedestrian hybrid beacon crossing of South Walnut Street at the Switchyard Park entrance and B-Link Trail connection. The work at this crossing of South Walnut Street is expected to start this week.

The City anticipates demolition activities as identified in the Hospital Site Master Plan may start as early as late July at the Hopewell Phase 1 East project site bounded by 2nd Street to the north, 1st Street to the south, B-Line to the east, and Rogers Street to the west. Some activities such as equipment mobilization, and building preparations for demolition may begin this week and the installation of site fencing will likely happen next week. The City ITS Department recently took aerial photos of the site that will be updated during the course of the project to document the transformation of the area.  Additional information about the project and the contractor can be found at the following links: https://bton.in/mRp~I, hopewellbloomington.org and renascentinc.com. The Hospital Site Redevelopment Master Plan is available at https://bton.in/mlLbk.

During their July 19th meeting, the Bloomington Public Works Department approved daytime road closures on Grant and Dunn to support IU’s contractor during the demolition phase of the Indiana University Poplars Building on 7th Street, west of campus. The project will not involve any impacts on the City’s recently completed 7-Line project.

Progress continues on the City’s crosswalk improvement project at the intersections of, 3rd and Grant Streets, 11th Street and Blair Avenue, and Patterson and Isaac Drive. Demolition has begun at all three intersections, and new curbs have been poured at 3rd and Grant. The project requires a short-term full closure of Grant Street just north of 3rd Street to facilitate pavement maintenance and is being coordinated with a water main connection for the adjacent development project (The Annex). Additional information about this project can be found at bloomington.in.gov/engineering/projects/crosswalks.

Construction of a new sidewalk and tree plot on N Dunn Street began July 13th. The public may have noticed temporary traffic control between 15th and 17th Streets, to accommodate construction activity, which includes a detour for southbound traffic on N Dunn to Indiana Avenue. This week demolition activities have taken place and the contractor is preparing to install a portion of the new curb by the end of this week. Additional information about the project and the contractor can be found at bloomington.in.gov/engineering/projects/dunnsidewalk.

The City’s project to construct traffic calming along E 7th Street, Graham Drive, and Ralston Avenue are expected to be substantially complete by the end of July. This week’s highlight includes the installation of the asphalt speed cushions along Graham and Ralston Avenue. Final work tasks to be completed over the upcoming weeks include final paving on 7th Street, installation of signs and pavement markings, and installation of rectangular rapid flashing beacons at the intersections of Graham at Rogers and Rockport. Additional information about the project and contractor can be found at bloomington.in.gov/engineering/projects/ralstongraham.