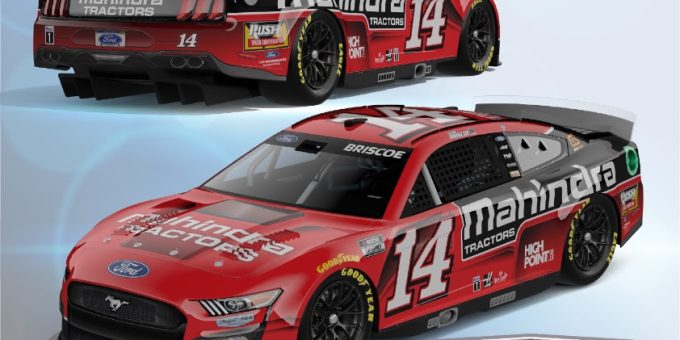 NASHVILLE Tenn. – With 16 of 36 races complete, Chase Briscoe, driver of the No. 14 Mahindra Tractors Ford Mustang for Stewart-Haas Racing (SHR) is 13th in the driver championship. He currently holds a spot in the 16-driver playoff field by virtue of his March 13 win at Phoenix Raceway.

After the season’s only off weekend, the NASCAR Cup Series returns to action at Nashville (Tenn.) Superspeedway for the Ally 400. The race starts at 5 p.m. EDT on Sunday, June 25th.

“Well, you still have to get to Phoenix. If you don’t get to Phoenix, it doesn’t matter how good you are. We got back to what we were doing at the beginning of the year and I feel like we have our speed back. Hopefully, we can continue this. But, I don’t think there is a championship favorite. There are a lot of guys who are capable. This NextGen car is so weird how it is. One week you can be really good and the next week you can be way, way off. We just have to continue to get better and put ourselves in a position to keep trying to run up front. If we do that and get to Phoenix, I am confident we can go there and battle. It is just a matter of getting there. If you aren’t one of the final four guys, it doesn’t matter how good you are there.”

“This car doesn’t create as big of a hole on restarts from an aero standpoint. The old car, with that 500 package, it would just create such a huge hole that you’d get such big runs on restarts and you could gain six, seven spots on a straightaway. It was just different how it responded down the straightaway, where this car doesn’t necessarily seem to have that as much. I feel like, with the old car, you would maybe sometimes gain two or three rows on lane choice even on some of these mile-and-a-halves because guys didn’t want to be on the bottom on the straightaway. With this new car, it seems like everybody takes inside out, it’s back and forth and you don’t really get that huge row gain like you used to be able to with the old car. So, I feel like you have to be a little more aggressive in this car just because it seems like obviously restarts is the easiest time to get the positions, and then after that, it gets pretty aero-sensitive.”

Sunday’s race marks Briscoe’s second start at the 1.333-mile, concrete oval. In last year’s inaugural Cup Series event there, Briscoe started 16th and ran inside the top-10 for a majority of the race before a loss of brakes sent him into the outside wall on lap 228. The No. 14 was scored 31st despite a strong run to that point.

“I haven’t felt like the new car is a lot different, to be honest. I feel like it’s still a racecar. It still does a lot of the same things,” Briscoe added. “I felt like maybe when I got decent on the road courses is when I started maximizing the brake zones in the old car, and with this car you can do that a lot better, so I guess just how you drive with the brake pedal on the road courses would be the biggest thing that I kind of have to retrain myself on. But truthfully, with the IMSA stuff I’ve done, it’s kind of similar to that feel, so I wouldn’t say that I’ve had as much muscle memory to relearn or forget about switching from the old car. I haven’t had any issues – knock on wood – but it is different, I think, for the guys who have done it for a long time and are trying to retrain themselves with a lot of those things.”

While Briscoe only has one start at Nashville, the No. 14 team has shown great improvement in the last two races at intermediate tracks. The Mahindra Tractors driver finished fourth in the Coca-Cola 600 at Charlotte (N.C.) Motor Speedway on May 29, then won his career-first pole at Gateway International Raceway in Madison, Illinois near St. Louis on June 5. He led the first 27 laps before a flat left-rear tire forced him to make an unscheduled pit stop.

Mahindra Tractors, a brand of Houston-based Mahindra Ag North America, returns to No. 14 at Nashville. A part of Mahindra Group’s Automotive and Farm Sector, Mahindra is the No. 1-selling farm tractor company in the world, based on volumes across all company brands. Mahindra farm equipment is engineered to be easy to operate by first-time tractor or side-by-side owners, and heavy-duty to tackle the tough jobs of rural living, farming, and ranching. Steel-framed Mahindra tractors and side-by-sides are ideal for customers who demand performance, reliability, and comfort at a great value. Mahindra dealers are independent, family-owned businesses located throughout the U.S. and Canada.