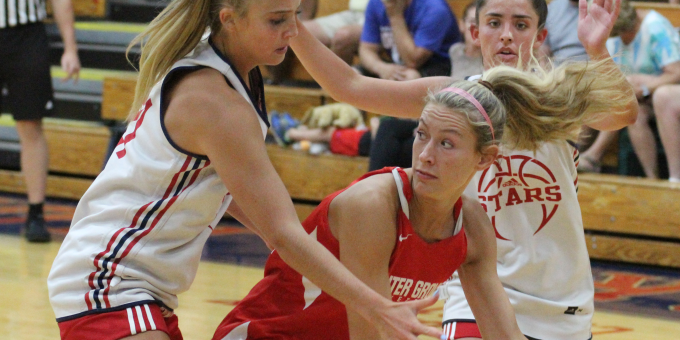 BEDFORD – Emma Brown spent a miserable winter – and all winters create a misery index, with the cold and darkness – on the Bedford North Lawrence sideline, watching her team generate the heat. Her heart ached to be on the court, but her surgically-repaired left knee ached more. She will never forget those nights, wondering if it was a dream.

Now it’s June, and the girls of summer were back. See, at BNL, even summer is basketball season. Thought it was spent lounging by the pool, basking and baking? Think again. For the Stars, it’s a month of sweating and shooting, scrimmages and practice. Success in frigid February begins in the sweatbox.

For Brown, no June has been more important. So as the Stars closed out the scrimmage season with a 60-42 victory over Center Grove on Thursday afternoon, giving the loyal fans a glimpse of the upcoming 2022-23 campaign, she was getting back up to game speed, testing that knee, making up for time lost.

Her mood is like the Don Henley song, a little voice inside her head yelling “Don’t look back, you can never look back.” She thought she knew what basketball love was, what did she know? That year is gone forever. She’s letting go.

“It was super important,” Brown said. “I hadn’t played in so long, so it gave me a good way to get back into playing – with it not being too serious yet.”

How cool was it that Brown splashed the first 3-pointer? That she scored 6 points as the Stars finished the month with a perfect 5-0 record? How about the brilliance of super junior Chloe Spreen, who attracts multiple defenders like flies at a cookout and still scored 24 points to pace the Stars in the close-out win?

There were other notable highlights during the triumph over the Trojans. Madisyn Bailey buried three early treys as BNL zoomed in front. Mallory Pride grabbed 11 rebounds, which will once again be a point of emphasis for a height-challenged team of guards and wings. Karsyn Norman scored 11 points, and BNL’s defense was on point and electric quick.

“Much better,” BNL coach Jeff Allen said. “The effort was there. I’m really happy with what we did today. The effort was much better, the enthusiasm, they were focused. It’s a nice way to end the summer season.”

Bailey’s three treys got BNL off to an 18-11 lead after the first quarter. Brown’s second bomb and a Spreen wing three after an offensive rebound gave the Stars a 31-22 edge at the half. In the third, Pride converted a layup off a Norman pass, Norman and Spreen swished back-to-back bombs, and Spreen scored (a whirling dervish in the paint) as the margin swelled to 45-30.

BNL displayed some firepower to go with the dynamic Norman-Spreen duo that will attract unbelievable attention. That’s expected. Norman is an Indiana All-Star candidate, and Spreen has more college offers than a war hero’s medal count. The key to BNL’s future success will be the supporting cast’s ability to score and inflict damage.

“I want them to score as often as they can,” Allen said. “But if they don’t have an opening, I want them to find a teammate and make them a better player. I think we’ve got more shooters. People will zone us, but we have a few more kids that are dangerous. That will make it difficult to do that. That’s what stuck out. I didn’t know a couple of these kids could shoot it pretty well.”

Spreen scored in a variety of ways – 3s, lane spins, rebounds, pull-up jumpers in transition. Norman and Bailey (who finished with 11) added offensive punch. That was quite a performance against a Center Grove team that prides itself on defense. That’s been a staple under sixth-year coach Kevin Stuckmeyer.

“Kevin’s teams play hard,” Allen said. “That why I like to play coaches that I know, how they coach, in the summer time. They’re one of the better defensive teams you’ll run into. They make things difficult. So if you can score against that bunch, you have a really good chance. They’re hard to score on.

“It’s been a good summer. I think we figured out what we needed to figure out. It’s a good bunch of girls. I like the chemistry.”

The shooting was a result of ball movement. Brown used her season on the brink of inactivity to watch the action in front of her.

“I feel like I can see the floor better,” Brown said. “I was used to sitting on the bench, and I got to see what spots were open. We scrimmaged a lot in practice, so I got more into game speed that way.”

BNL will now start the countdown to the season opener in November.