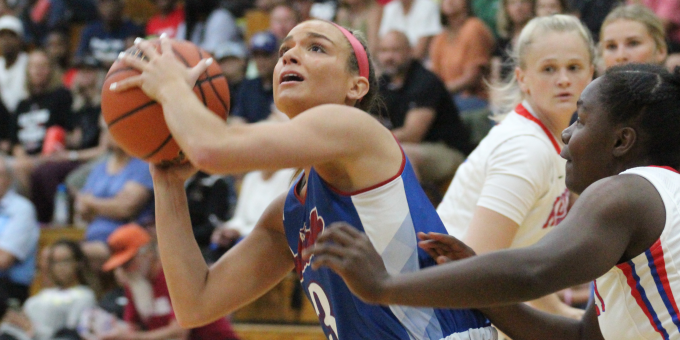 BEDFORD – As Indiana’s once-laughable lead shrank to a breath-holding stage that was no laughing matter, Karsyn Norman took that crucial moment to launch one of those ‘wow’ shots. Pick up a loose ball, step back to straddle the volleyball line that dissects the center circle and the 3-point arc, and fire.

Fourth quarter, state pride and personal honor at stake as the jumper covered the 25-plus feet. Swish, a momentum killer for Kentucky’s furious comeback and another point for the Bedford North Lawrence star point guard and her deserved selection to the Junior All-Stars. Big moment? The smallest kid on the court would take it, and make it.

Norman scored 12 points, and Indiana survived late disaster for a 92-89 victory over Kentucky on Sunday afternoon at BNL Fieldhouse. RaShunda Jones scored a game-high 20 points, and Amber Tretter hit two clutch free throws for the Hoosiers, who won for the 10th time in the 11-game series with their southern neighbors.

Indiana started the fourth quarter with a 70-49 advantage, but the next 10 minutes were agonizing and interesting as that margin vanished under extreme pressure. Kentucky crashed within single digits with 5:35 left, and scrambled within 80-74 when Norman buried her bomb to briefly destroy the rally. From that point, Jones did the rest of the heavy lifting, with three free throws and a layup off a sideline inbound set. Tretter’s two free throws created the final difference with 8.1 seconds left, and Kentucky couldn’t get a trey airborne to force overtime.

For Norman, the homecourt start in the All-Star setting was special. From the moment she was introduced, to a thunderous ovation, until victory was secured, she was in the spotlight. The hometown girl with something to prove. And she did that, hitting three treys, scoring 8 points in the third quarter when the Indiana lead exploded.

“It was awesome, from beginning to end,” Norman said. “It was so fun. It got close, a little frustrating. It always comes down to heart. Nobody wants to lose to Kentucky. We just pulled it off.

“I was really nervous, I didn’t want to let everyone down. It was like another home game, that helped calm me down. I knew I had something to prove, but it definitely helped to be here. For a while there, we were feeling comfortable – maybe too comfortable. But we finished it off.”

Indiana never trailed, rushing to a 19-4 lead with an early 11-0 run as Tretter scored twice in the post and Jones added two buckets. From that early domination, Kentucky – which was coming off a stunning victory over the state’s Senior All-Stars on Saturday – was in constant catch-up mode. Indiana went to halftime with a 46-31 lead, then Norman cut loose with a drive for a scoop layup and two deep treys from both wings. Columbus East’s Saige Stahl scored seven quick points during the final minutes of the third, including a trey for Indiana’s biggest lead at 68-45.

In the fourth, with Kentucky forced to press and scramble, Indiana struggled. The Hoosiers, who only met for 30 minutes to work on an offense and other pregame scenarios and asked for any personal scouting reports from amongst their group, gave up a 12-2 burst to start the final frame, and Kentucky could sense the confidence shrinkage as Haven Ford swished a 3-pointer and drove for a 3-point play to get the lead inside double digits for the first time since the four-minute mark of the first quarter.

“The press gave us trouble because it sped us up,” Indiana coach Bob Lapadot said. “We went a little too fast. They were making tough shots (including a banked trey by Jakayla Thompson after the Norman step-back). Most teams lose that game when the momentum gets away from you like that. I was proud of the way we executed.“

Norman added four rebounds and an assist (although she had three unofficially) in her 25 minutes.

“Big shots,” Lapadot said. “She did a good job of stepping up and leading. She knew where her sweet spot was. She stepped back into a couple of those, and I was like ‘Holy cow.’ She just kinda went ‘Yeah, I got it.’ As good as a true point guard as she is, to see her step up and hit those big shots, it was a great showcase for these kids. Her basketball IQ is so high. She’s a special player.”

Jones, from South Bend Washington, was one of the core six who will also face the Senior All-Stars later this week. She came off the bench with fire, as did Tretter (13 points, 7 boards) and Stahl (13 points, 9 rebounds). Noblesville’s Ashlynn Shade, a Connecticut recruit and the leading candidate for Miss Basketball in 2023, had 9 points and 12 rebounds. Indiana’s only glitch was 25 turnovers.

“You have a core six – you can’t start six,” Lapadot said. “Somebody has to go down. We really needed a guard with that second group, and Jones just took control. She was a leader, went out and got big shots. She just got after it. They are great players and exceptionally talented, one of the better Junior teams I can think of. I’m just proud of them.“

Ford and Brianna Byers paced Kentucky with 18 points each while Kensley Feltner added 12.

In the boys game, Indiana won 112-102. Markus Burton had 24 points and Myles Colvin added 21 for the Hoosiers.

Indiana’s Juniors will now face the Seniors in a scrimmage at Mt. Vernon (Fortville) on Wednesday, helping the elder All-Stars prepare for the home-and-home series with Kentucky on Friday (in Owensboro) and Saturday (at Southport Fieldhouse).