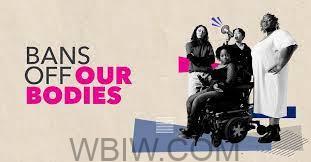 LOUISVILLE KY. — On Saturday, May 14, in direct response to the onslaught of abortion restrictions advancing around the country, Planned Parenthood Alliance Advocates in Indiana and Kentucky (PPAA-IN/PPAA-KY) and allies for reproductive freedom, will mobilize online and in person at the Planned Parenthood health center in Louisville, Kentucky and the Allen County Courthouse Green in Fort Wayne, Indiana.

The national day of action is meant to send a clear and loud message to politicians who want to control our bodies and our lives: BANS OFF OUR BODIES.

The day of action comes as we prepare for a Supreme Court decision this summer on a Mississippi abortion ban that could overturn Roe v. Wade, which guaranteed the right to abortion nearly 50 years ago. So far this legislative session more than 500 abortion restrictions have been introduced in 41 states, including legislation to stop access like Kentucky’s House Bill 3, which stopped abortion access across the commonwealth for eight days. Kentucky is the first state to have gone completely dark on abortion care since Roe v. Wade became the law of the land in 1973.

In Indiana more than 100 Republican legislators at the Indiana General Assembly have demanded Governor Holcomb call a special session to ban abortion outright in response to the SCOTUS decision, expected this June.

Support for abortion access is at a record high — 8 in 10 Americans want abortion to be legal, including 65 percent of Kentuckians and 88% of voters in Indiana. This day of action will send a loud and clear message to politicians: Banning abortion is unconstitutional, dangerous, and deeply unpopular. We will not stand for it.

WHAT: Bans Off Our Bodies National Day of Action in Support of Abortion Access

WHO: Planned Parenthood Alliance Advocates and champions for reproductive freedom in Kentucky and Indiana.