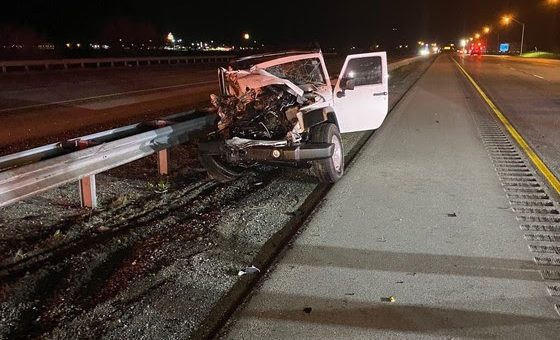 LAKE CO. – Tuesday at approximately 3:00 a.m., the Indiana Department of Transportation (INDOT) was performing road repairs on I-65 in Lake County.

The roadway was reduced to one lane, the left lane, being open while trucks with impact attenuators and arrow boards blocked the right two lanes.  State troopers were also at the locations with their emergency lights activated to alert drivers of the construction project.

During the lane closure, a white 2017 Jeep Wrangler struck one of the impact attenuators at a high rate of speed, narrowly missing a police car that was stationary with its emergency lights activated.  The trooper that witnessed the crash immediately went to the Jeep and observed the driver, who was not wearing a seatbelt, to be unconscious and unresponsive.

Additional first responders arrived at the scene and were able to render first aid to the driver.  The driver eventually regained consciousness and was unaware that they had been involved in a crash.

Preliminary investigation by Troopers Carlson and Hathaway shows that the Jeep had been making a lane change from the far-left lane to the right where the roadway was closed.  The driver failed to yield to the arrow boards and emergency lighting and struck the impact attenuator.

After striking the attenuator, the vehicle spun into the center median guardrail.  The driver was later transported to Franciscan Health Hospital in Crown Point for treatment of non-life-threatening injuries.

Additional investigation led the troopers to believe that the driver was impaired at the time of the crash.  While still at the scene, the driver did not realize that she had been involved in a severe crash.

The driver, Aubrey A. Allee, 28, from Demotte, subsequently refused a certified chemical test.  A blood warrant was requested and issued by a Lake County Superior Court Judge.  That warrant was served to Allee and the blood draw was completed.  The results of the blood draw were .245% B.A.C. (Blood Alcohol Content).  The legal limit for intoxication is .08%.  Once cleared by the hospital, Allee was transported to the Lake County Jail for booking.

She is preliminarily charged with the following:

The driver of the INDOT truck was not injured.  Assisting at the scene were the Crown Point Fire Department and Cheever’s Towing.