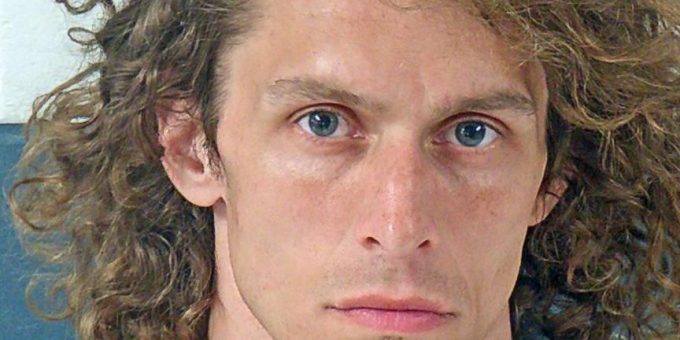 MITCHELL – An Indianapolis man was arrested Thursday after Mitchell Police officers were summoned to the Sinclair station on State Road 37 in reference to a welfare check at 11:29 p.m.

The caller reported there were two people acting strangely outside of a vehicle and then left the vehicle unattended.

When police arrived they found the white Buick SUV at the entrance of the station. The vehicle was not parked in a parking space or at a pump but near the entrance within feet of Highway 37. A Sinclair’s gas station employee exited the store and told the officers a male who was in the Buick was inside the store in the bathroom and had been in the bathroom for several minutes. The employee said the male was acting strange and was sweating profusely.

Officers entered the store and waited by the door of the bathroom for a couple of minutes before the male exited.

The male had bloodstains on his shirt and pants. He had what appeared to be a fresh injury on his right hand. The male later identified as 32-year-old Karl Davidson, of Indianapolis, also appeared to be under the influence of a narcotic drug.

Davidson was escorted outside. Officers said Davidson “appeared to be extremely nervous as he kept pacing and stumbling on his words when he spoke. He also appeared to be sweating”.

Davidson could not explain why he left his vehicle at the entrance of the lot. Officers then asked where the second person was who was in the vehicle. Davidson stated, “I don’t want to get no one in trouble”.

Davidson told officers he was in Mitchell just “visiting a friend”.

Davidson was told the dog alerted officers to drugs in the vehicle. He then became defiant and insisted the officer was lying. The officers told Davidson they were going to search his vehicle and requested his keys. He refused and kept saying it was a “setup”.

Davidson repeatedly refused to hand the officer his keys and became verbally argumentative and kept moving backward away from the officer.

Officers then attempted to detain Davidson and he had to be forcibly placed on the ground where he continued to struggle with the officers.  He was told if he didn’t cooperate he would be tazed. He then stopped and was placed in handcuffs.

Officers removed a .380 handgun from his Davidson’s waistband. There were 8 rounds in the magazine.

An ambulance was called to the scene to check Davidson’s injuries he suffered during the struggle.

One officer also complained of left shoulder pain due to Davidson resisting.