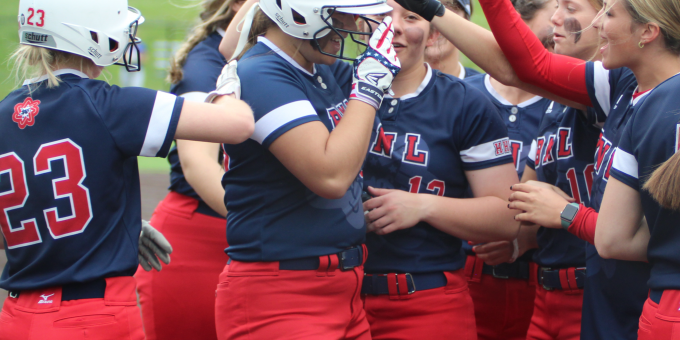 BEDFORD – Braxton McCauley was seeing red. Part of that was blamed on a scratchy contact lens, which can be irritating, part of that could be blamed on her three strikeouts in Bedford North Lawrence’s previous performance, which was definitely annoying. Don’t worry. Her vision, and her swing, are just fine.

McCauley slugged two home runs, powering Class 4A No.3 BNL to an 11-0, five-inning victory over county rival Mitchell on Thursday afternoon. McCauley’s two bombs highlighted a 14-hit attack, while Annie Waggoner and Hayley Davis combined for a two-hitter as the Stars (13-1) rebounded from their first loss with an emphatic mercy-rule triumph.

BNL took control with a five-run first, then McCauley demanded the spotlight with a two-run blast in the second and another two-run jolt in the fourth, raising the Purdue recruit’s season total to five. That’s the kind of firepower expected from BNL’s deluxe center fielder.

“It felt amazing,” McCauley said. “Coming back like that, it felt great. We weren’t down. It was a good game (against Columbus North), we fought until the end, and we played this game like every other game.”

Well, this game isn’t quite like any other. It’s the Lawrence County clash, with family and familiarity criss-crossing the lines of the rivalry. The Bluejackets (9-5) were going to get BNL’s best anyway, but coming off that loss just added extra motivation.

“It was a bounce back,” BNL coach Brad Gilbert said. “We made a lot of mistakes the last game, we know we’re better than that. We had to be ready and the kids came out ready to play.”

BNL, which hasn’t lost to Mitchell since 2001, struck quickly. Waggoner started the scoring with a RBI single, Ava Ratliff lashed a run-scoring double to center, Maddy Bennett doubled off the fence to drive in another run, and Carsyn Alvey cracked a RBI single for the 5-0 lead.

In the second, Waggoner was hit by a pitch, Ratliff rifled another double, and McCauley followed with her no-doubt launch to right for an 8-0 advantage. Tori Nikirk singled and later scored on Bennett’s sharp single. In the fourth, Ratliff ripped her third double and McCauley slammed her second homer to cap the offensive explosion.

“Ratloff hits like a man, like a guy over at Murray Park just annihilating the ball,” Mitchell coach Steve Canada said. “I thought I saw the ball smashed together when she hit it.

“They’re very talented at the plate. We wanted to see what it was like to play against a good hitting team. We learned a lot. You can’t give them extra outs and be competitive. We’re trying to mimic what they do. We’re learning as we go.”

In addition to the powerful Ratliff-McCauley combination, Nikirk and Bennett both had two hits.

“We had several kids hit the ball well, and that was nice to see,” Gilbert said. “Sometimes when you see different speeds from one team to another, it might be hard to make adjustments. But I felt like we did that well.” The adjustment was simple – move forward in the batter’s box, wait a little longer to pull the trigger, don’t try to hit the long ball. Look what happened.