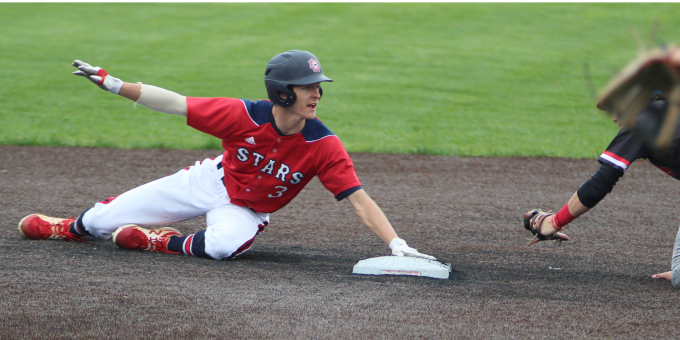 BEDFORD – Like a broken record – or to paraphrase new-age technology, like a music list stuck on repeat – Bedford North Lawrence keeps hearing the same song. Over and over.

For the fourth straight game, the Stars failed to score, suffering another frustrating, heartbreaking loss in extra innings. Borden, ranked No.3 Class 3, scored twice in the top of the eighth inning to edge BNL 2-0 on Thursday afternoon.

Sound familiar? That’s 30 consecutive scoreless innings, that’s two setbacks in extra frames during a three-game span. The Stars (6-8) collected only three hits (only one for extra bases) against three Borden hurlers. Perhaps they’re gripping the bats too tight, maybe swinging too hard, pressing too much. Sooner or later, the offense will catch up to how well BNL’s staff has pitched. It can’t come soon enough.

“We had chances, not very many,” BNL coach Jeff Callahan said. “They’re good, quality opponents, they throw strikes and play defense. When teams do that, you have to earn it.

“We’ve pitched unbelievably well, you couldn’t ask for anything better. We just have to score some runs.”

The Braves (10-3-1) finally ended the stalemate against BNL reliever Nate Pemberton. With one out, Mason Jones singled, and Alex Schuler cracked a double to left. Gavin Gentry was intentionally walked to load the bases, and Pemberton got A.J. Agnew to ground to third, with BNL’s Kline Woodward throwing home to cut down that runner. But Dylan Toler came through with a clutch double to drive in the go-ahead runs.

BNL starter Will Adams worked the first five innings and surrendered only three hits. But he was matched by Borden’s Jones (5 innings, two hits), Gentry (one inning) and Kaden Holmes (two innings).

BNL’s only hits came from Maddox Ray (infield single in the third), Ryker Hughes (bunt single in the fifth) and Grant Dalton (double in the fifth). BNL left only four on base (two in the second). Schuler also made an exceptional play at shortstop, diving and throwing out a runner while sitting on the turf.

The Stars will visit Martinsville on Friday.