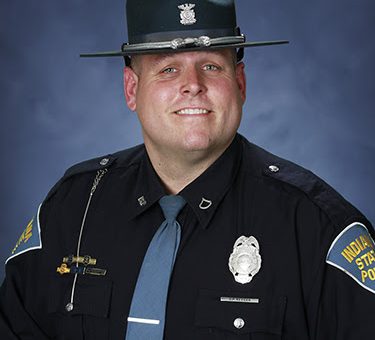 Keegan is a native of Pendleton, Indiana and graduated from Pendleton Heights High School in 1999.  Keegan went on to attend Hanover College and earned a Bachelor of Art degree in Psychology in 2003.

Keegan graduated from the 64th Indiana State Police Recruit Academy in 2004 and was appointed as a Trooper assigned to the Lafayette Post.  Keegan transferred back to the Pendleton post in 2008.  Keegan has been assigned as a patrol unit for the last 14 years until his promotion to Sergeant.

During his 18-year career, Keegan has served as a member of the Crash Reconstruction Team, a firearms and defensive tactics instructor, Tactical Intervention Platoon, and as a Field Training Officer.

In 2019, Master Trooper Keegan received a commendation for his life saving action performed on a choking female.

Sergeant Keegan resides in Madison County with his wife Amanda and his two daughters Quinn and Ashtyn.