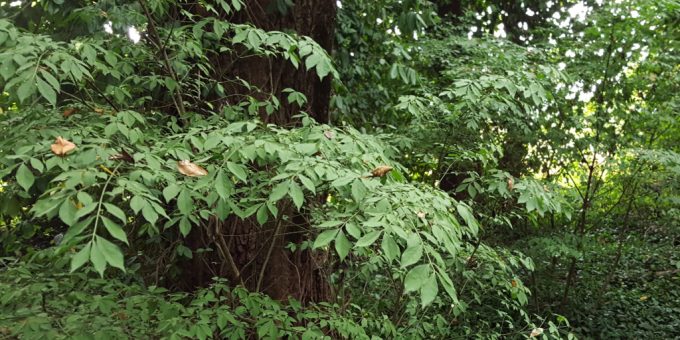 BLOOMINGTON – Hardwood plants dominate Indiana’s natural ecosystems, however, in recent decades these species and other native species have been under threat from invasive plants and deer overpopulation. This combination of pressure has led to multiple problems within Indiana’s wild spaces, including decreases in native biodiversity, aesthetics, carbon sequestration, and protection of water quality.

To help landowners understand and combat the problem of deer grazing and invasive species, a partnership between IU researchers and Monroe County Identify and Reduce Invasive Species (MC-IRIS) provided training to Monroe County residents on how to manage invasive species and deer and established a tool kit lending program.

The team also created tool kits that residents can borrow for use in controlling invasive species on their land.

The team is conducting a community science study in 2021. For this study, the team is working with 20 landowners in Monroe County to investigate the connections between deer, invasive plants, and native plants in forested areas. Various restoration methods will be tested to identify promising strategies for restoring native woodland habitats after invasive species removal. Just as was done for the workshops, the effects of the study on landowner knowledge will be measured by administering pre-and post-study surveys.

After writing up and publishing their results, the team will continue working with MC-IRIS and city and county land managers to apply successful strategies identified in the study. The results could inform best practices for other parts of the state and across the Midwest where invasive species and deer run rampant.

The research team conducted surveys of participants from the workshops and will collect data on a field experiment studying the interactions of invasive species, native species, and deer browsing.

From the surveys, multiple-choice and short answer questions were asked and gathered from the participants. At the conclusion of the field experiments, the team will have data on invasive species removal and prevention, native species survival, and deer pressure.

On the residential woodlands, the team will set up a 2-meter by 8-meter study area and remove all invasive plants from the area using traditional removal methods. The team will then establish four plots within the study area, two of which will be planted with native plant species–three species that are deer resistant and three that are deer sensitive–and two unplanted plots. Additionally, one planted and one unplanted plot will be caged as protection from deer, while the remaining plots will be uncaged. Landowners will take standardized photographs at monthly intervals during the growing season and at the end of the project, and researchers will measure other variables, such as light availability and plant species composition and cover.

From the surveys, there are numerical and textual responses.

The variables from the field experiment will include percent cover, survivorship, and plant height for the native and invasive species, and a measure of browsing.

The data will be formatted in spreadsheets, charts, and graphs. There will also be photographs of the plots.

The data will be available on request.